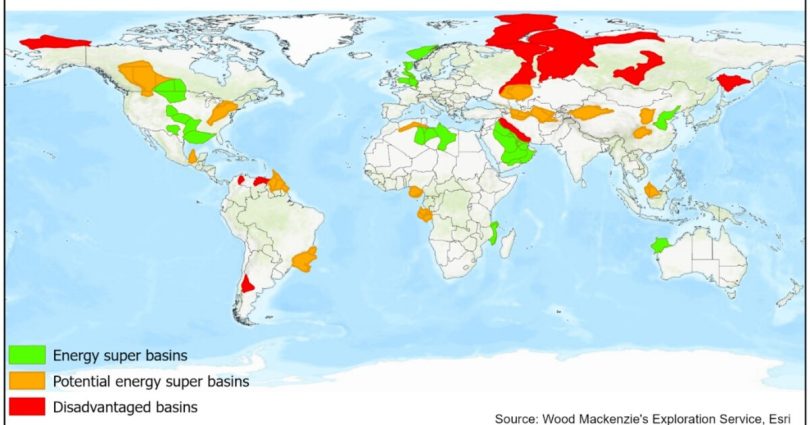 Aside from plentiful reserves, two other requisites are access to low-cost renewable energy and large-scale carbon capture and storage (CCS).

This is according to a new report from Wood Mackenzie which found that only half the world’s super basins are likely meet these criteria in the next decade. The resource volume of these assets is estimated to be around 1.4 trillion BOE.

“The upstream industry of the 2030s will have a different footprint as investment migrates to the new energy super basins. With some basins set to be left behind, the industry will become even more concentrated in its top basins,” said Andrew Latham, a vice president for Wood Mackenzie.

He added that as this scenario unfolds, “upstream strategies will increasingly merge with low-carbon businesses.”

Wood Mackenzie highlighted in its assessment that fewer than 50 super basins are responsible for more than 90% of global oil and gas supply. All of these basins had an original reserves volume of at least 10 billion BOE and at least 5 billion BOE remaining.

Super basins that meet the qualifications laid out by Wood Mackenzie include the US Gulf Coast and the Permian Basin that straddles Texas and New Mexico. Both regions have increasing access to solar and wind power generation.

Wood Mackenzie is also hopeful about the chances of major CCS activity gearing up along the Texas coast. A number of projects have been announced in recent years, almost all of which aim to absorb the region’s petrochemical emissions and store them in onshore and offshore injection reservoirs.

Also making the grade according to Wood Mackenzie are the Rub’ al Khali Basin in the Middle East, the North Sea, and the Carnarvon Basin offshore northwestern Australia.

Super basins not forecast to keep up with stiffening global expectations on lower emissions include nearly the entirety of those found in Russia and Iran. Argentina’s Neuquén Basin, home to the Vaca Muerta Shale, is also labeled a “disadvantaged basin” as is Venezuela’s Orinoco Belt which is known for holding the world’s largest crude reserves.

Time Running Out To Catch Up

To decarbonize the world’s biggest oil and gas basins, operations will need to be co-located with low-cost solar, wind, and other renewable energy projects. Wood Mackenzie said such electrification efforts will be oil and gas producers’ fastest route to eliminating Scope 1 and 2 emissions, as many of the biggest plan to do by 2050.

Scope 3 emissions—those resulting from the combustion of oil and gas products—represent a vastly bigger problem, and one that Wood Mackenzie called “the elephant in the room.” That’s because Scope 3 emissions represent more than 90% of the oil and gas industry’s emissions profile and are for the most part left out of the upstream sector’s plans to reduce emissions.

But at 18.5 billion metric tons per annum (Btpa), these end-use emissions are getting harder to ignore since they count for more than half of all energy-derived emissions globally. This of course underlines the need for the upstream industry, or others, to step up on the delivery of CCS projects.

Today’s existing, planned, and proposed CCS projects amount to less than 1 Btpa in total capacity. Wood Mackenzie noted that these projects are in just a small number of countries which it sees as a factor of the lack of affordable CO2 point sources vs. a lack of subsurface storage potential.

The outlook for CCS is not certain and this is reflected in part by the large berth Wood Mackenzie is using in its own projection: it estimated global CCS capacity will stand somewhere between 2 and 6 Btpa of CO2 by 2050. “Exactly how and where this will happen is unclear,” said Latham on CCS capacity growth.

What is more clear is that those countries with large and consolidated sources of emissions will have a leg up in solving the economics and logistics piece of the CCS puzzle, hence the optimism around the US Gulf Coast.

For those “disadvantaged basins” that are at risk of being left behind and those that fall just short of a “future-fit” classification, Latham argued that urgent action is needed to turn their fates around. In many cases, this translates to a need for government action on carbon taxes and other measures that are seen as key ingredients to spurring upstream decarbonization efforts and enabling the CCS business model.

“It will take many years, even decades, to fundamentally realign global upstream portfolios with the new energy super basins. First-mover advantage applies. The sooner the transition starts, the better,” he said.