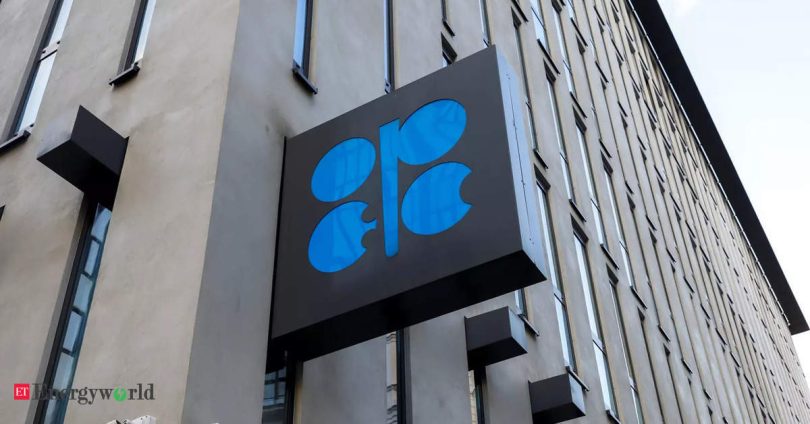 Vienna: The OPEC oil cartel and its allies decided Wednesday to boost production in September by a much slower pace than in previous months at a time of high gasoline prices and unstable energy supplies exacerbated by Russia’s war in Ukraine. OPEC, led by Saudi Arabia, and its allies, led by Russia, said they will increase output to 100,000 barrels a day next month after raising it by 648,000 barrels per day in July and August.

The group considered what effects staggering inflation and rising COVID-19 rates may have on global demand for fuel in the fall.

It comes after US President Joe Biden visited Saudi Arabia last month, aiming to improve relations and encourage more oil production from the cartel to draw down high prices at the pump.

While gasoline prices have been falling, they are still high and posing a political problem for him as inflation surges.

No oil production agreement was announced, but Biden said he expected OPEC to take steps to increase production in the coming weeks. Those hopes didn’t materialize.

As a result, “the US may go looking for other sources of oil, whether it’s Venezuela or Iran,” said Jacques Rousseau, managing director at Clearview Energy Partners.

Biden’s administration also is encouraging the US oil and gas industry to increase production.

“You’ve just seen the second-quarter results from some of these companies. They are record profits,” Amos Hochstein, a senior adviser for energy security at the State Department, said Wednesday on CNBC. “They should be investing those dollars right back into production increases.”

Despite the modest increase announced by OPEC+, the administration was trying to highlight that prices are already falling and could fall further with more domestic production.

“We’re pretty pleased with what we’re seeing” on prices for oil and gas down from highs, but “we know that this is not enough,” Hochstein said.

A senior Biden administration official, who insisted on anonymity to discuss private conversations, called the OPEC+ announcement a step forward. The official said the group has restored all the production cuts it made in 2020 during the depths of the pandemic, when oil prices and demand plummeted.

The group has been gradually adding more oil and gas to the market as economies recovered.

Some OPEC nations, such as Angola and Nigeria, have been producing less than the agreed-upon amount. Saudi Arabia and United Arab Emirates, on the other hand, have the capacity to increase production.

OPEC’s decision appears to be an attempt to appease those countries that can’t produce more, Rousseau said.

“Any time you increase the target, there’s countries that can’t participate,” he added. “If you only raise production by 100,000 barrels per day, that’s just a small piece for everybody.”

As a result, the amount of oil on the market might not keep up with demand, so high oil prices may persist for some time.

While the US was probably hoping for a larger production increase, “in terms of overall supply/demand management, OPEC’s decision is logical,” Noah Barrett, research analyst for energy and utilities at Janus Henderson Investors, said in a note.

“There’s still a great deal of uncertainty on oil demand in the back half of this year, driven by questions around Chinese demand, and the potential for US or even a global recession.”

The price of oil rose sharply after Russia invaded Ukraine in February. It fell somewhat since OPEC+ last met but rose modestly Wednesday. A barrel of US benchmark crude was selling for just over USD 94, compared with more than USD 105 per barrel a month ago. Brent crude, the international standard, was selling for just over USD 100 a barrel, also down about USD 110 from a month ago.

Russia’s oil and natural gas exports to the world have declined as many nations imposed sanctions or curtailed buying from the major supplier due to its invasion of Ukraine. Russia also has reduced or cut off natural gas to a dozen European countries, further driving up energy prices, squeezing people’s spending power and threatening to cause a recession if nations can’t stockpile enough natural gas to get through the winter.

It was the first official monthly meeting of the OPEC+ group since its leader, Mohammad Sanusi Barkindo, died at age 63 in his home country of Nigeria last month. Haitham al-Ghais, a veteran of the Kuwait Petroleum Corporation, took over as secretary general of OPEC this week.

In the US, a gallon of regular gasoline was selling for USD 4.16 on average Wednesday. That’s substantially lower than in June, when the nationwide average surpassed USD 5 a gallon, but it’s still painfully high for many front-line workers and families to afford and about 31 per cent higher than what drivers were paying a year ago.