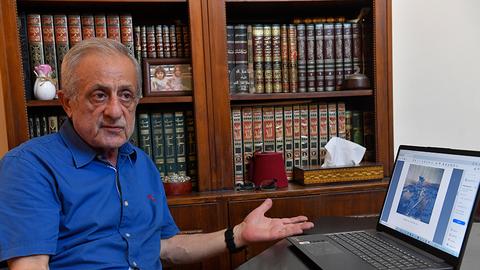 The modern foundations for the Port of Beirut were established during Ottoman rule, a Lebanese historian suggests.

The Port of Beirut, which was destroyed by a big explosion two years ago in Lebanon, was renewed during the Ottoman period and modernised by Sultan Abdulhamid II, a historian says.

The port, which constitutes an important source of income for Lebanon, became largely unusable in the big explosion of August 4, 2020. The silos in the port, the country’s grain warehouse, were also demolished recently.

The foundations of the modern port were first laid during the Ottoman period so that it could contribute to the country’s economy.

Suheyl Muneymine, head of the Lebanon-based Heritage Beirut Foundation, is one of the people who conduct important research on the history of the port, a significant Ottoman monument.

Muneymine, who has access to the Ottoman archives in Istanbul, told Anadolu Agency (AA) that he uncovered photographs of the port in 2016, which was reconstructed during the reign of Abdulhamid II.

Muneymine stated that according to the photographs he obtained from the Ottoman archives, the reconstruction of the port took place in the 1890s.

He stated that the port has thousands of years of history, but the Ottoman sultans were instrumental in its main renovation and its full connection to world trade routes.

Pointing out that Lebanon was under the rule of the Ottoman State from 1516 to 1918, Muneymine went on to say:

“The Ottoman State decided to reconstruct the Beirut Port as of 1880. The aim was to strengthen the trade link between Beirut and Istanbul, as well as to provide a model port for Beirut. The construction began during the reign of Abdulhamid Han and took about two years. Once the project was completed, customs, business administration, warehouse, shelters and train tracks were built in the port.”

According to Muneymine, there was only one terminal in the port and no administrative and customs centre before the decision to renovate was made. He emphasised that once the project was implemented, the port gained international importance.

The Lebanese historian pointed out that the decision to connect the port to the Damascus-Beirut railroad was a strategic one, leading to the establishment of strong trade links between Beirut and Europe.

He stated that Abdulhamid Han built many palaces and government offices that are still intact for Lebanon, and the reconstruction processes were documented and archived by professional photographers.

Muneymine said that there are photographs of the construction or renovation of many works, including the port, in the Heritage Beirut Foundation’s collection.

He also thanked Türkiye for allowing access to the photographs and letting copies be filed in the foundation.

On August 4, 2020, in the Beirut Port, a fire broke out in the warehouse containing the explosives, and then a very strong explosion followed that shook the whole city.