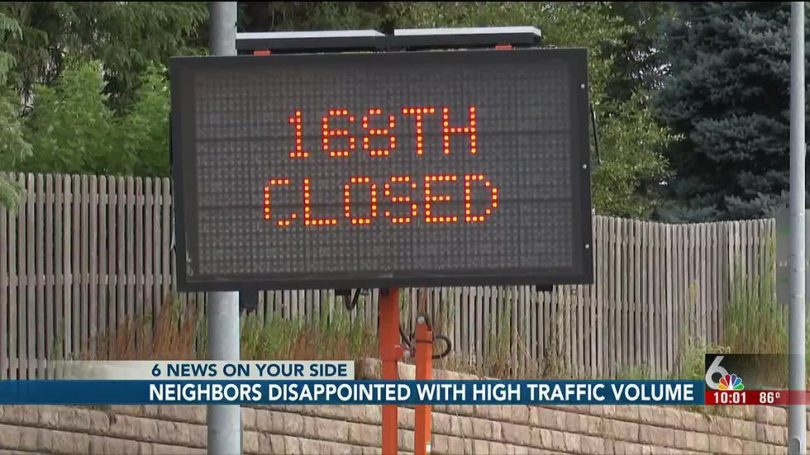 OMAHA, Neb. (WOWT) – A major road project in southwest Omaha moves into the next phase.

“This is a federal aid project, so we’ve been working on this one for over a decade,” Todd Pfitzer of Omaha Public Works said. “It’s an involved project so we’re finally there and it’s time to build it.”

The two lanes of 168th Street are desperately in need of replacement and expansion. Utility crews are already closing parts of 168th to install infrastructure.

This $30M project is made possible with the help of a federal grant that picks up 80% of the tab.

The city covers the rest.

When finished, it will look just like the recently reopened stretch of 168th to the north.

One big difference, this part of 168th bisects Zorinsky Lake and that means a bridge project.

“Building a bridge takes a lot of time and so we’ll start on that that’s one of the early phases of construction and this project will be built under traffic so there will be traffic on the existing alignment as we build the new bridge and build the new alignment there will be some very limited delays when you cross things over and things like that but for the most part it’s going to be built under traffic,” Pfitzer said.

Another concern is the trails along 168th.

“We have made a lot of effort to keep those trails open as long as we possibly can,” Pfitzer said.

He added there may be some closing during the bridge construction but alternative routes will be available.

That part of Omaha has rapidly grown in recent years and with this project being long overdue, neighbor Debbie Cornwell made a difficult decision.

“The Army Corps of Engineers cut down all the trees in our backyard and that made it very loud and then we knew this project was coming so we felt after living here for 13 years that we didn’t want to go through that process and so we moved,” she said.

Joe Putjenter lives nearby and said there’s another issue.

“We’re getting 20 cars a minute zooming down the street and it wasn’t safe,” he said.

A major road project in southwest Omaha is moving into its next phase.

Earlier in the week, Putjenter photographed a parade of traffic from South 168th Street flooding his neighborhood.

“So, people instead of going down 168th Street which is 45 miles an hour they’d come down Orchard, come down 170th with zero respect for the speed limit,” he said.

The posted speed limit in Putjenter’s neighborhood is 25 miles an hour.

Despite electronic signs telling drivers of the road closure, it didn’t stop the flood of traffic into nearby neighborhoods on both sides of 168th.

“It seemed most of the people that came down the street were just made because they’ve become inconvenienced and man they’d get to this corner and almost every car you’d hear it accelerate and just…zoom,” Putjenter said.

Putjenter said drivers are figuring something out.

“Yeah, they’re figuring out how to go 45 miles an hour down another street and mad about it because now it takes an extra 30 seconds now,” he said.

Putjenter and other neighbors complained and a speed signal was installed in the area. He said things changed dramatically when one lane of 168th was reopened.

“It changed everything,” he said. “All of a sudden, we’re back to almost normal again.”

“You can see still there’s people come down Orchard well past the speed limit…I mean I’d love to see that slowed down a little bit. But…like this guy right there,” he said.

Putjenter hopes crews can keep 168th open and traffic in his neighborhood to reasonable levels.

Due to the project being heavily federal funded, there are more requirements that have to be met by the city. One example, sound walls were installed on the north leg of 168th Street to reduce noise in nearby neighborhoods.

They will not be needed on this part of the project.

The city will begin work on the project next spring. It will take about two years to complete.