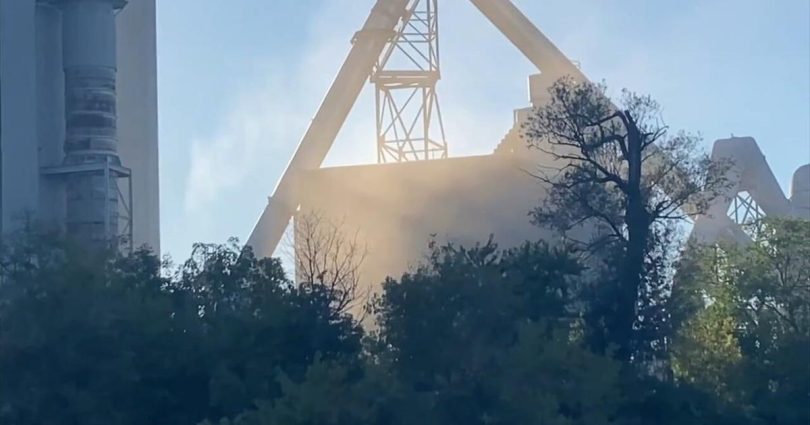 Cement dust in that area is nothing new, but some neighbors say it’s really been excessive lately.

The DEP is looking into one particular incident over the Christmas weekend. Several homeowners we spoke with described it like it was snowing, except it wasn’t snow. They believe it was fine cement dust from the nearby Keystone Cement factory that you can see in the distance from the Greenbriar Village neighborhood.

Rick Spinelli took cell phone video of the emission from the factory on Dec. 26.

“There’s been times when it actually looks like it’s snowing it gets so bad,” said Spinelli.

When we talked with Spinelli he took us around his property, showing us the grit and grime still stuck on his patio furniture.

“If you leave your vehicle sit here too long, you can’t even use windshield wipers or anything to get the dust off. You can’t see through your windows,” said Spinelli.

In the investigative report we obtained from the DEP there are several pictures of that dust on windshields throughout the Greenbriar Village neighborhood.

“You get up in the morning, you clean your car, and it looked like it snowed overnight. That’s how bad it is,” said Sharon Heckman, who also lives in Greenbriar Village.

Heckman tells us she’s lived in the neighborhood and dealt with the dust for the past 26 years.

“It’s hard to get off the windows. It’s really hard. You use vinegar and everything, it doesn’t come off,” said Heckman.

The DEP’s report does not directly accuse Keystone Cement of being responsible for the dust, only calling the company the “Potential Responsible Party.” Heckman and Spinelli, however, say there’s no other source it could have come from, and they just want the pollution to stop.

“We have to breathe this stuff in, and there was a guy out here after that last big one happened over Christmas who said he couldn’t even stand out here with his dog,” said Spinelli.

“It would be nice if they’d find a solution that would help us out here. I know they’ve been here long, but so have we,” said Heckman.

In reporting this story we called Keystone Cement and emailed the company, but we never got a response. The DEP did not give us a timeline for when they will have an official determination to say if Keystone was responsible for the dust, and if they committed any environmental violations.

What others are reading…