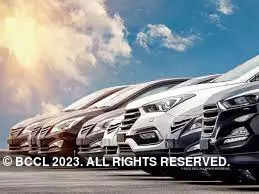 However, in the two-wheeler segment, most of the manufacturers such as Hero MotoCorp, Bajaj Auto, Honda Motorcycle and Scooter India, and TVS Motor reported subdued sales during the festive season, which normally leads to high takeoff of motorcycles and scooters.

Market leader Maruti Suzuki India reported a 26 per cent rise in its domestic sales at 1,47,072 units last month as against 1,17,013 units in the year-ago period.

Alto, WagonR, Swift and Baleno were the leading models last month with seven models from the auto major making it to the top ten selling list, he said.

Srivastava noted that the passenger vehicle wholesales last month were the third highest ever behind just July and September dispatches this year.

“The passenger vehicle industry in the April-October stood at 22.74 lakh units as compared with 16.48 lakh units last year, a growth of 38 per cent. It is expected this year we should see a figure of 38 lakh units for the industry. For MSI, we are expecting a similar number as last year which was the highest,” he stated.

Srivastava said the company had close to 3.9 lakh pending bookings while the industry figure stood at around 8 lakh units.

With strong response for both the new Brezza and Grand Vitara, the company’s overall market share in the SUV segment has grown to around 14 per cent in October from around 9.5 per cent last year, he added.

HMIL Director (Sales, Marketing & Service) Tarun Garg said with the ever improving semiconductor situation, the company was able to meet the demand of its customers and deliver cars during the festive season in October.

Home-grown auto major Tata Motors said its PV sales, including electric vehicles, in the domestic market were at 45,423 units as compared to 34,155 units in the same month last year, up 33 per cent.

Similarly, M&M reported a 60 per cent rise in domestic passenger vehicle sales at 32,298 units in October 2022 as against 20,130 units sold in the same month last year.

“Our sales volume continued to grow in October on the back of strong festive demand,” M&M President, Automotive Division, Veejay Nakra said.

Kia India reported a 43 per cent rise at 23,323 units in October as compared to 16,331 units dispatched to dealers in the same month last year.

Likewise, Honda Cars India also reported an 18 per cent increase in domestic wholesales at 9,543 units in October. The company had dispatched 8,108 units in the domestic market in October last year.

Volkswagen said it was selling its WeShare unit, which offers around 2,000 all-electric cars for hire in Hamburg and Berlin, to German company Miles Mobility.