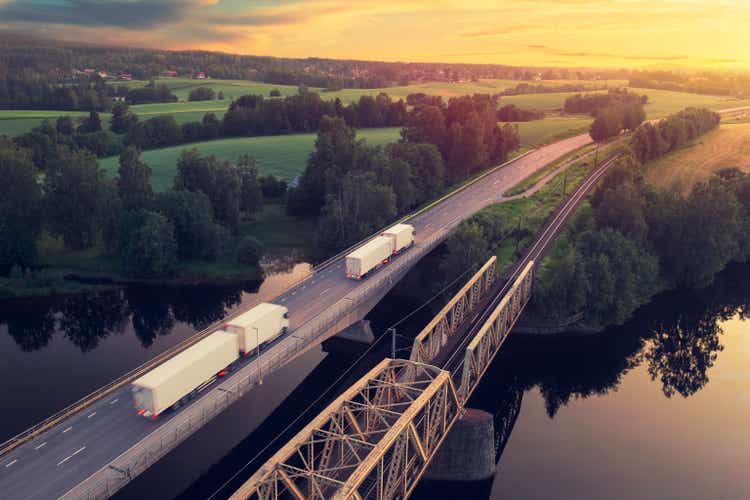 I last wrote about the Global X U.S. Infrastructure Development ETF (BATS:PAVE), an infrastructure index ETF, in mid-2021. In that article, I argued that PAVE’s strong growth prospects, boosted by increased infrastructure spending, and cheap valuation made the fund a buy. Since then, valuations have started to normalize, resulting in moderate outperformance for the fund, more or less as one would expect.

Rising share prices have led to a more expensive valuation for PAVE, but valuations remain comparatively cheap. Skyrocketing inflation, higher interest rates, and worsening economic fundamentals have led to weaker growth prospects for PAVE, but these remain comparatively strong. PAVE remains a cheaply valued fund with strong growth prospects and a buy, albeit one with somewhat weaker fundamentals than in the past.

PAVE is an equity index ETF, investing in U.S. companies focusing on the development of U.S. infrastructure. The fund tracks the INDXX U.S. INFRASTRUCTURE DEVELOPMENT INDEX, an index of these same securities.

The index includes all U.S. equities from the following four industry segments / themes:

Companies which derive the majority of their revenues from the above themes are eligible for inclusion in the index. This process is somewhat discretionary, and ultimately up to the index provider.

As with most index funds, securities must also meet a basic set of size, trading, and liquidity criteria for index inclusion. The index includes up to 100 different companies, selected by market-cap. It is a market-cap weighted index, with floors and caps meant to ensure a modicum of diversification.

PAVE’s underlying index is quite niche and somewhat discretionary, so the fund behaves as a cross between an actively-managed fund and an index fund. Performance should mostly track the performance of the U.S. infrastructure development industry, but discretionary fund investment decisions matter too.

PAVE focuses on infrastructure development companies, which mostly means industrials and materials, with smaller investments in a couple of other industries. PAVE’s industry exposures are consistent with the fund’s index and strategy.

PAVE’s holdings provide investors with several important benefits. Let’s have a look at each of these.

PAVE focuses on infrastructure development companies, which have incredibly strong growth prospects. Congress passed a $1.2 trillion infrastructure bill late last year, which calls for billions in new spending for roads, bridges, transmission lines, and the like. Increased federal infrastructure spending is an incredibly boon to infrastructure development companies, and for PAVE itself. Some of the fund’s holdings will directly benefit from said spending. Sempra Energy, for instance, might be tasked with building new transmission lines, for a profit. Some of the fund’s holdings will indirectly benefit from the same. CSX, the railroad operator, might benefit from wider railroad networks. In any case, increased infrastructure spending should lead to increased revenue and earnings growth for many of PAVE’s underlying holdings, an important benefit for the fund and its shareholders.

PAVE focuses on industrials and materials, two industries which have seen significant, much improved growth these past few years, especially industrials. There are several reasons for this.

The Trump Administration imposed significant tariffs on many imported goods, especially industrial and manufactured goods, including steel. Said tariffs led to increased demand for non-tariff U.S. goods, which meant increased sales and earnings for U.S. manufacturers. Nucor, for instance, claimed the tariffs enabled the company to invest $1.2B in a new steel plant in 2018. These tariffs (mostly) remain in place, so U.S. manufacturers are still earning market share from their foreign, tariffed, competitors, increasing their revenues and earnings.

The coronavirus pandemic led to a significant increase in demand for durable goods, as lockdowns and social distancing measures meant some services were simply unable. You couldn’t go to a restaurant in March 2020, but you could buy a dishwasher, so consumers bought lots of dishwashers. Demand for durable goods rose in 2020, and has remained high ever since. Manufacturer revenues and earnings have increased in the years since, including in 2022.

Due to the above, infrastructure development companies should see strong, above-average growth in the coming years. Analysts are generally forecasting the same. As per J.P. Morgan, industrials, the fund’s largest industry segment, should see earnings growth of 28.7% in the coming years, almost thrice the 9.8% equity average. As per Global X, implied growth rates for PAVE are equal to 22.1%, more than twice the equity average.

PAVE’s strong growth prospects could lead to significant, market-beating capital gains and returns for the fund and its shareholders. Capital gains are strongly dependent on investor sentiment, especially considering the fund’s lackluster 0.7% yield. Investor sentiment is broadly positive, as evidenced by the market’s continuing shift towards old-economy industries and companies since the pandemic subsided. PAVE has slightly outperformed since 2021, although the performance gap has significantly narrowed these past few weeks.

PAVE’s comparatively cheap valuation could lead to capital gains if valuations were to normalize.

PAVE’s comparatively cheap valuation also serves to buttress the company’s potential capital gains from its strong growth prospects. Growth stocks tend to trade with premium valuations, as future growth is generally priced-in by current investors. PAVE’s strong growth prospects are most definitely not priced-in, as the fund trades with a discount relative to broader equity index funds with weaker growth prospects. Under these conditions, future growth should lead to capital gains, in my opinion at least.

PAVE focuses on old-economy industries and companies, which has two important negative implications for shareholders.

PAVE’s holdings are strongly exposed to underlying economic conditions, and generally see worsening revenues and earnings during downturns and recessions. Although this is the case for most companies and industries, the effect is particularly strong for industrials, the fund’s largest industry segment. If you are fired, you still have to eat and pay the water bill, but you don’t really have to buy a new dishwasher, so industrials see significant revenue reductions during downturns, while consumer staples and utilities do not. In fact, as per J.P. Morgan, industrials are the industry most exposed to economic growth.

Industrial’s strong exposure to economic growth is a benefit during economic expansions, but a negative during contractions, and the economy is currently contracting. GDP growth has been negative all year, with the economy entering into a technical recession last June. The economy remains weak, as continued supply chain disruptions, high energy prices, skyrocketing inflation, and rising interest rates, are complicating the production of many goods and services, and zapping consumer and business confidence. PAVE would almost certainly see above-average losses if the economy continues to weaken, a distinct possibility.

PAVE’s holdings are almost all stodgier, relatively slow-growing old-economy companies. Current growth prospects are quite strong, but that is not generally the case. Current investor sentiment is broadly positive, at least relative to the broader market, but that is, also, not generally the case. PAVE’s holdings had seen weak, below-average returns from inception to around 2021, a period of around four years.

Although conditions have materially improved since, the fund’s underperformance during the time period above is still an important negative for the fund. Conditions could always change again.