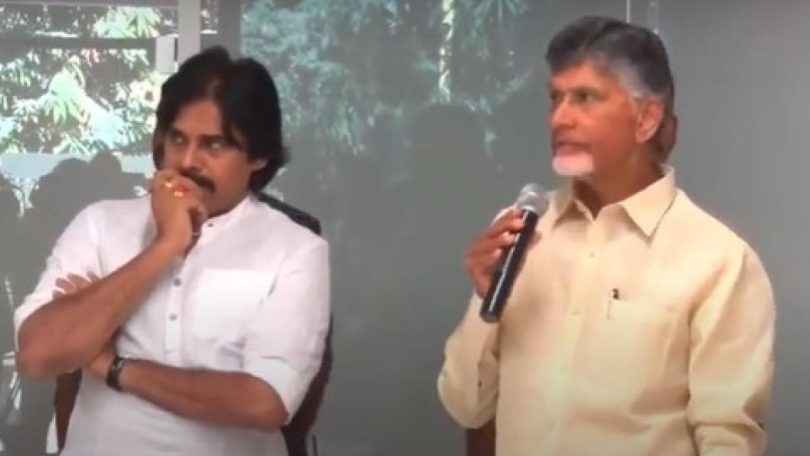 Pawan Kalyan visited Chandrababu Naidu’s residence to extend support to the TDP’s fight against, what they called, the most undemocratic order prohibiting public meetings on roads. Both the leaders said that what Andhra Pradesh is facing currently is worse than the Emergency.

“Attempts are being made to stifle the voice of the Opposition parties in the state. All the political parties, along with people’s organisations, will wage a combined war to save democracy,” said Chandrababu Naidu.

Pawan Kalyan found fault with the state government for creating obstacles to Chandrababu Naidu’s tour in Kuppam. The Jana Sena chief said that he called the TDP supremo to express his solidarity with him.

Pawan Kalyan said both of them ponded over the prevailing situation in the state, particularly after the government issued the order prohibiting public meetings on roads, and felt the YSRCP government is only trying to suppress Opposition parties.

“The YSRCP government is acting in an atrocious manner and brought in a government order of the Britishers’ time to stifle the voice of the Opposition parties. Pensions are being withdrawn at will and no minimum support price (MSP) is being paid to farmers,” said Pawan Kalyan.

“The Opposition parties will jointly fight the draconian measures of the state government. The attitude that no one should question the YSRCP government is highly condemnable,” said the Jana Sena chief.

“It is really surprising that a leader, who has been representing his assembly segment for seven times, is not allowed to visit his home constituency. Is it not the duty of the police to provide security when meetings are being organised? When I questioned the police, they failed to give a proper reply to me,” said Chandrababu Naidu adding that democracy can be saved only when political leaders have the freedom to move.

“This government does not want Pawan Kalyan and TDP national general secretary Nara Lokesh to undertake a padayatra. Political parties and people’s organisations will wage a combined fight to save the democracy. If necessary, the Centre too should intervene,” said Chandrababu Naidu.