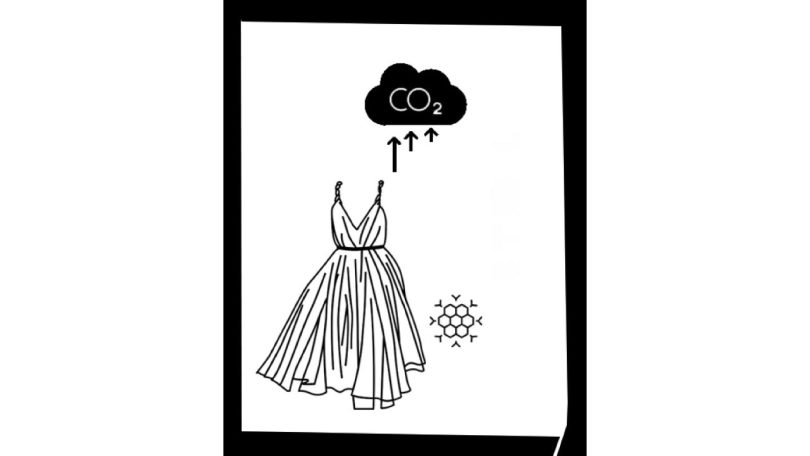 Indians wear a lot of plastic on their bodies, but who cares? All of these garments, from the warm, shiny fleece jackets worn in the winter to the body-hugging workout clothing and stretchy comfortable lowers, are either entirely made of plastic fibres, such as polyester, nylon, or acrylic, or a blend of natural fibres, such as cotton and wool, and synthetic material. About 60 per cent of Indian clothing is plastic, including polyester, acrylic, and nylon textiles. Global polyester production has increased by about 900 per cent during the past three decades. The textile industry, especially the fashion industry, is extremely fond of polyester, which is lighter, wrinkle-free, shrink-resistant, does not fade in colour, and, most attractively, a lot cheaper at Rs 105 a kg compared to Rs 213 for cotton. Clothes made of plastic appear harmless, but their infiltration into the textile industry is cause for concern.

Polyester clothing has a massive carbon footprint due to carbon dioxide emissions from the apparel industry, accounting for nearly 10 per cent of global carbon dioxide emissions—more than international flights and shipping combined. In a decade from now, the industry’s emissions will escalate by 50 per cent. A fifth of the 300 million tonnes of plastic produced globally each year is polyester (World Bank data). Synthetic fibres make up 69 per cent of all fibre production globally, which requires high energy expenses and, though theoretically recyclable, ends up in landfills or gets burned for energy, releasing toxic emissions.

According to Common Objective, a global network of fashion brands, the oil-based plastic, polyester, does not biodegrade like natural fibres. Rather, it remains in landfills for several decades, if not centuries. Possibly, this is the next most drastic environmental hazard in comparison with the highly chemically-centric Green Revolution. Small wonder, plastic fibres are single-handedly fuelling  “fast fashion” like “fast food”—both hazardous in their own ways, the former to the environment and the latter to the human body—a trend in which consumers buy and dump clothes at a dizzying rate. In 2000, the world produced 50 billion new garments; nearly two decades later, that figure has doubled, as per the data released by the Britain-based MacArthur Foundation, promoting  circular economy. It says, “People buy 60 per cent more clothes today than they did a decade and a half ago, and just discard them after wearing them for half the time as before.”

Despite the concerning trend mentioned above, India expects polyester exports to increase from $40 billion to $100 billion over the next six years. Cotton drove the Indian textile industry, accounting for 70 per cent of textile exports. Switching to polyester, this scenario will drastically change. Reliance on polyester will surely face major challenges, as India is still devising legal frameworks or guidelines to handle the huge waste the attempt will generate.

Synthetic plastics shed tiny microplastic pieces with each wash and wear, which pollute oceans, freshwater, and land and pose a danger to animals that consume them accidentally. Discovered in the 1930s, the polyester fabric market expanded exponentially into the 1970s. Polyester will be the world’s largest driver for fossil-fuel-based energy. Most Indians are unaware that Reliance, one of the world’s largest polyester producers, producing 2.5 million tonnes annually, sources cheap Russian oil, thus operating as a “hand-in-glove” business and, sadly, indirectly fuelling the unjust war between Russia and Ukraine.

Polyester is here to stay because cotton cannot meet national demand. The current model of polyester production and waste management is simply unsustainable for India. India needs to recognise the important basic fact that polyester textile waste is nothing but plastic waste. This is a very crucial fact because, as of now, India has strong legislation to handle plastic waste but not polyester textile waste, because the latter is broadly covered under the Municipal Solid Waste Rules of 2016.

Sustainable design is the answer, which the fashion industry is reluctant to adopt. If not, most clothes made will not be recyclable. A 100 per cent polyester shirt can be recycled into a new shirt, and this can be done several times before being downcycled. When it is blended, only a carpet can be made out of it, which subsequently ends up in a landfill. The fashion industry hates transparency; information on dyeing plastic fibres, dyes, and chemicals used is kept from public knowledge. Put in place the extended producers’ responsibility (EPR) for polyester to put the onus on the brand owners responsible to make the sector “circular” in India. Plastics, tyres, batteries, and e-waste sectors are covered by EPRS, where industry players have specific targets to collect and recycle waste. In Europe, EPRS also includes a component of product design that encourages manufacturers to create products that are easily recyclable. The fashion industry seeks refuge in the absence of these stringent regulations, opting for a laissez-faire approach! Such strict laws will ensure a better collection rate of textile waste before it reaches the landfill.

In Indian cities, formal industrial mechanical sorting and waste treatment is catching up, relegating the informal sector to the back yard. Surprisingly, it has been found that in Indore, the cleanest city as per the Centre’s Swachh Survekshan campaign, the city was diverting all of its textile waste to cement kilns. Burning waste in cement kilns is akin to moving the landfill from the ground to the sky.

India must venture into hemp and banana fibre, which guzzle far less energy and water and are also recyclable and more durable. Such alternatives definitely exist in the market, but their uptake is limited. For this to happen in the textile sector, both ingenuity and drive on the part of the researcher are needed. The million-dollar question is whether this exists in India.