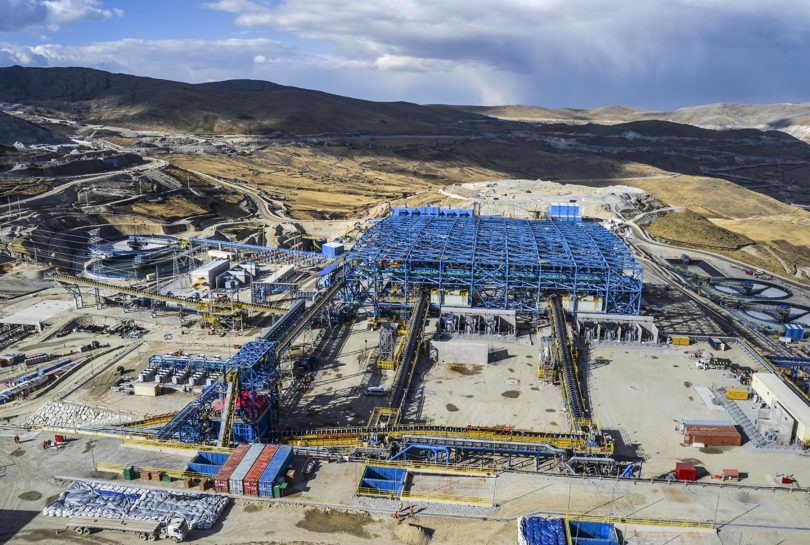 Year-over-year production reflected an improvement when it comes to copper, tin, and molybdenum.

However, there was a decrease in the accumulated production of gold, zinc, silver, lead, and iron compared to the first quarter of 2021, the Ministry of Energy and Mines (Minem) reported on Saturday.
According to the Mining Statistical Bulletin (BEM), prepared by the General Directorate for Mining Promotion and Sustainability, Minem specified that copper production accumulated during the first three months of this year registered a rise of 4.2% (553,749 fine metric tons) thanks to the greater volume obtained by Antamina, Cerro Verde, and Las Bambas.

Production by those three mining companies accounted for 53.3% of the total red metal obtained nationwide.

For its part, the production of tin, accumulated thru March, presented a year-on-year increase of 6% (6,819 FMT).

Within this framework, Minsur remains the only producer of this metal in Puno region.

The year-on-year production of molybdenum accumulated in the first quarter showed a rise of 2.1% (8,276 FMT) due to the good performance of companies Cerro Verde and Chinalco.

For its part, Southern Peru Copper remains the main producer of this metal with 38.7% of the total, whereas Cerro Verde and Las Bambas contributed 36.7% and 11.2%, respectively.

The BEM also revealed that, last February, mining exports (metallic and non-metallic) reached US$3.390 billion —an increase of 17.8% over the same month of 2021.

During the January-February period, mining exports totaled US$6.224 billion, registering an increase of 10.7% compared to the same period in 2021.

The value of metallic mining exports in February totaled US$3.318 billion, which meant an increase of 17.4% over the same month of 2021 (US$2.826 billion) due to the high prices of metals and progressive recovery of external demand.

Copper is the main product exported from Peru, with a 29.7% share of total shipments.

China holds the first place as destination for red metal exports, thus accounting for 75.6% of the total.

Japan comes in second position with 7%, followed by South Korea (third place) with 4.6% of the total exported.