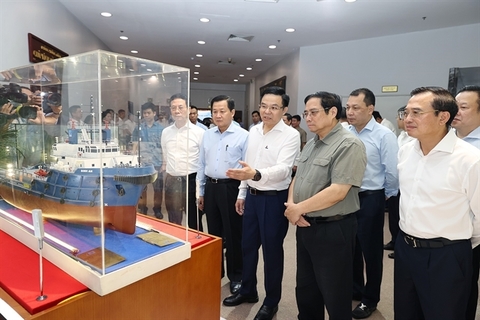 Prime Minister Pham Minh Chinh on Sunday met with leaders of the Viet Nam Oil and Gas Group (Petrovietnam) to speed up the implementation of several key projects and ensure the group’s energy supply targets can continue to be met.

While the group has had much success, they still face difficulties and obstacles in the long run. For example, some mechanisms and policies are unsuitable for actual operations; the decentralisation mechanism for the group is not effective enough; oil and gas projects still have many problems; and unresolved financial backlog.

To overcome the above-mentioned difficulties and problems, the group proposes the Government and the Prime Minister to focus on three areas; the development strategy and organisational structure of the group until 2035; proposed groups related to the consumption of the country’s gas resources; and the mechanisms and solutions for specific investment projects.

These projects include the chain of gas-power projects at Block B – O Mon, the Long Phu 1 power project, the Dung Quat oil refinery upgrade and expansion project, and the reserve of Long Son crude oil and petroleum products.

At the meeting, Prime Minister Pham Minh Chinh said that in the development process, Petrovietnam has had ups and downs but has made great achievements.

The Prime Minister praised the efforts of the collective of oil and gas employees, especially in the context of the recent COVID-19 pandemic, for maintaining its leading position and making important contributions to the country’s socio-economic development.

The Prime Minister also highlighted the lessons the group needs to promote, implement or overcome through directing and handling proposals and recommendations proposed by Petrovietnam’s units.

Analysing the situation in the future, the Prime Minister pointed out that there are advantages and opportunities mixed with difficulties and challenges, especially for the oil and gas industry, as Petrovietnam is responsible for guaranteeing the energy supply of the country.

The PM emphasised the group must ensure energy supplies, especially petroleum, for national construction and defence, as well as contribute to the cause of industrialisation and modernisation of the country. This ensures Viet Nam has an independent and self-reliant economy, driving technological innovation, digital transformation, energy transformation, green transformation, diversification of supply chains, and assurance of social security.

“Petrovietnam must be proactive in international co-operation, but ensures national secrets and economic security secrets; persevered and steadfast in principles, but being flexible and creative in implementation,” emphasised the Prime Minister.

PM Chinh requested ministries, branches and localities to closely and effectively coordinate with the oil and gas group according to their functions, tasks and competence to carry out tasks and solutions.

The group continues to affirm its role in the Vietnamese economy, making an important contribution to energy security, food security, economic security, national sovereignty, and the State Budget.

The group’s total contribution to the State budget reached VND112.5 trillion (US$4.8 billion) last year, exceeding 80 per cent of the year plan and increasing by 36 per cent over the same period.

Its total payment to the State budget reached VND90.6 trillion in the first eight months of this year, exceeding 40 per cent of this year’s plan and growing by 45 per cent over the same period.

The group’s production and business activities remained stable in the first eight months of the year.

Mining output management has been effectively applied with solutions and technical measures to increase output. The exploitation rate has been maintained, and crude oil exploitation results have exceeded 23 per cent of the eight-month plan and are equal to 84 per cent of the year’s plan, equal to the performance of the same period. — VNS