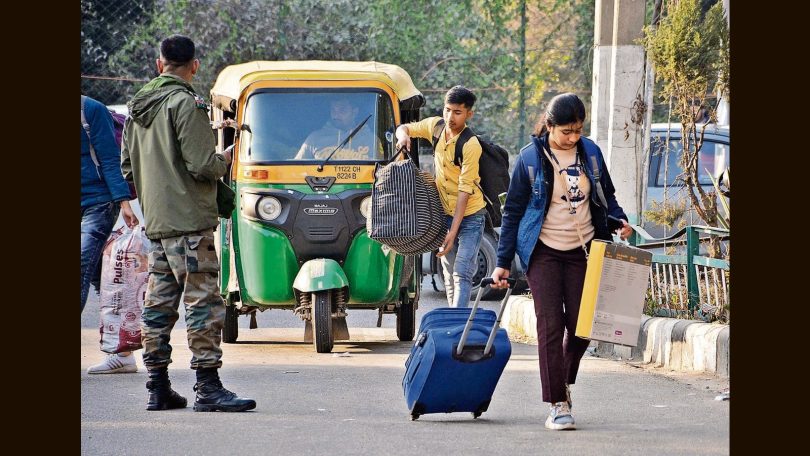 Introduced to decongest the pick-and-drop lane at the Chandigarh railway station, the new parking system, which entails an entry fee for commercial vehicles irrespective of stay duration, has ended up making arrivals at the station a nightmare for passengers.

Under the new parking system, implemented in September, while private vehicles are allowed free access to the pick-and-drop lane for six minutes, passengers arriving in commercial vehicles, including taxis and auto-rickshaws, have to pay ₹30 for even entering the lane, which they term unfair.

If the commercial vehicle ends up remaining in the lane for more than six minutes, the charge bumps up to ₹50 up for up to 15 minutes and ₹200 if the lane is not vacated after 15 minutes.

Consequently, be it sunshine or rain, passengers are often seen exiting the taxis and autos right outside the railway station and hauling their heavy luggage to the entrance, with no dedicated pedestrian path and rushing vehicles zipping right by them.

Those unacquainted with the system are left flummoxed when taxi and auto drivers ask them to either pay extra or walk to the entrance.

“Passengers unfamiliar with the system, which is unique to Chandigarh, are the worst hit,” said Harminder Singh, a resident of Manimajra who works in Delhi and commutes by train on weekends, adding that the system pinches the senior citizens and female passengers more.

Another passenger from Delhi, Sailesh Kumar, said the system should be uniform for all vehicles: “If the idea is to streamline traffic movement, either all vehicles should be allowed a certain free time limit for pick and drop or all should be charged uniformly, like at airports.”

Meanwhile, even private vehicle owners, who have to pay charges similar to commercial vehicles after six minutes, complain that the free entry window is not enough.

“Instead of making passengers’ experience comfortable, they have introduced unjustified pick-and-drop charges even before the journey begins. Worse, the rates are far higher than even parking fee at commercial areas of the city. While visiting markets is not always essential, entering the railway station to board a train is,” he argued.

Meanwhile, members of the Chandigarh Youth Congress have also been protesting at the railway station against the entry charges.

“Even after deboarding a train, the passengers do not get a cab or auto inside the railway station. Instead, the drivers ask them to walk outside to avoid the pick-and-drop charges. There should be no charge for a minimum 30 minutes,” said Manoj Lubana, president of the Chandigarh Youth Congress that also organised a protest at the station on Sunday.

Senior divisional commercial manager, Ambala, Hari Mohan said, “We have discussed this matter with the contractor and he has been advised to take it up with cab and auto drivers for a resolution. Maybe monthly passes for them could be worked out,” he said, adding that they were also working on developing a separate exit point for parked vehicles to decongest the main exit lane.