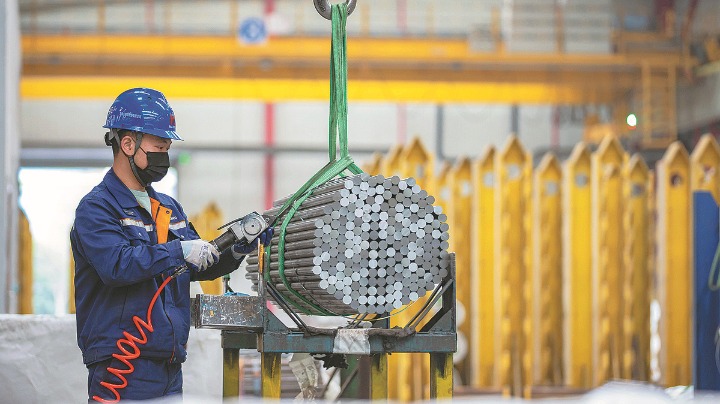 China will roll out guidelines for restructuring the layout of key sectors such as building construction, energy conservation and environmental protection for its centrally administered State-owned enterprises in 2023, according to the country’s top State assets regulator.

The plans come as the State-owned Assets Supervision and Administration Commission of the State Council, or the SASAC, said the government will focus on improving the quality of economic operation, deepening the reform of State-owned capital, and further supporting scientific and technological innovations to drive the high-quality growth of central SOEs this year.

Addressing a meeting in Beijing on Thursday, Zhang Yuzhuo, Party secretary of the SASAC, told heads of central SOEs that the government will continue to optimize the layout and restructuring of the State-owned economy, prevent and resolve major risks, and speed up the development of building world-class enterprises.

Relying on the leading role and strategic support of the State-owned economy, central SOEs will assist the country in stabilizing economic growth, employment and goods prices to contribute to the overall improvement of economic operation this year, said Zhang.

Apart from accelerating central SOEs’ digital transformation in traditional industries in 2023, the government will increase its financial support in the development of “new infrastructure” businesses, including 5G, artificial intelligence, data centers, the internet of things, satellite internet and industrial internet platforms, said a statement released by the commission after the meeting.

Despite downward pressure on the economy caused by the COVID-19 pandemic and external challenges, the statement said that central SOEs will likely see steady growth in revenue and profit for 2022 when the year’s figures are released later this month.

The combined annual revenue of central SOEs is expected to climb 8.3 percent year-on-year to 39.4 trillion yuan ($5.75 trillion) last year, according to the SASAC.

Bolstered by China’s three-year (2020-22) action plan for the reform of SOEs, the SASAC said it significantly pushed the strategic restructuring and professional integration among central SOEs last year.

Strategic mergers and acquisitions, reform measures like an emphasis on innovation, and the establishment of market-oriented operational and management mechanisms will reinforce central SOEs’ earning strength in 2023, said Zhou Lisha, a researcher with the Institute for State-owned Enterprises at Tsinghua University.

Central SOEs’ growing investment in “new infrastructure”-related projects will speed up the integration and application of innovative technologies with the real economy and support the digital transformation of small and medium-sized businesses in both upstream and downstream industries this year, she said.

China has approved a change in the status of Beijing-based China South-to-North Water Diversion Corp Ltd. It is now under the SASAC’s supervision, the commission announced late last week.

Founded in 2020, the group is a wholly State-owned company with registered capital of 150 billion yuan. Its establishment was a major measure taken to strengthen the management of the South-to-North Water Diversion Project, refine its engineering system and optimize the allocation of water resources in China.

This means the number of China’s central SOEs — which are under the direct regulation of the SASAC — has now reached 98.