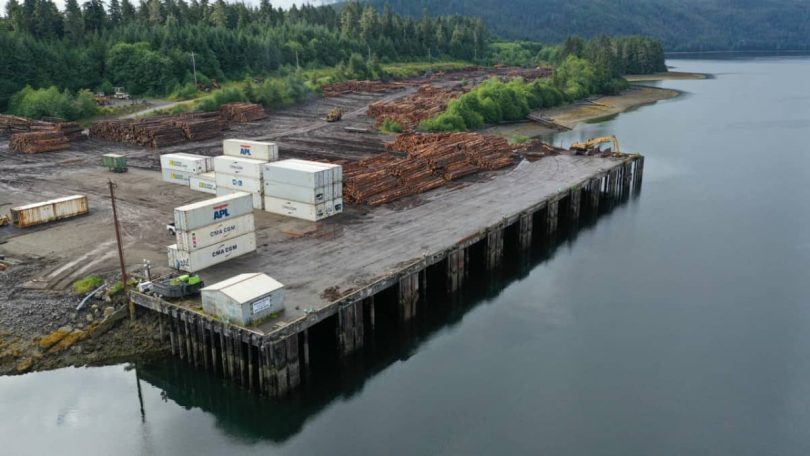 Initial plans have been announced for a brand new cruise port destination in Alaska. A three-phase plan to develop Prince of Wales Island’s first cruise ship dock has been released, and the first ship is scheduled to arrive at the island, in Klawock, Alaska, in May 2023.

Formerly a logging port, Klawock, Alaska, will be poised to welcome its first cruise visitors in less than a year. According to a report from KRBD Community Radio in Ketchikan, Alaska, the new port is being developed on Prince of Wales Island.

The island is located 60 miles northwest of Ketchikan, and the port facility will be on the island’s western coast. The community of Klawock has a population of fewer than 1,000 year-round residents.

The cruise port is being developed by Klawock Heenya along with Huna Totem Corporation, the same locally-owned, native Alaskan corporation that has successfully developed Icy Strait Point near Hoonah, Alaska, 40 miles southwest of Juneau and roughly 200 miles northwest of Klawock.

Klawock will be developed in three phases, with the first phase consisting of a tour dock, welcome center, limited food and beverage service opportunities, trail access, and necessary infrastructure such as restrooms and a bus turn loop to accommodate tours.

Mickey Richardson, Huna Totem Director of Marketing, said the existing dock is a great starting point for the development.

“What we’re trying to do is lay out kind of a floor plan or master plan that allows us to draw things such as power, where the welcome center is going to be, where the bus turn is going to be, and never have to move that (location) through the phases of development,” he said.

The second and third phases will further expand the port facility to include more retail and refreshment options, shore power connectivity for docked ships, and a “Main Street Alaska” district to showcase Alaska-made crafts, art, and other items.

“We’ll have different aged areas of engagement. So we will call it more like (a) “edutainment” type facility as part of the plan,” said Richardson. “Increased retail, fun concept of water theater, which is kind of a fun, larger, iconic experience for guests to have.”

Klawock residents have been invited to comment on the development, and their concerns have been addressed by Richardson, as well as Klawock’s mayor, Don Nickerson.

Topics discussed include wastewater from cruise ships, the influx of people into the small community when ships are in port, and possible strain on local emergency resources.

Huna Totem CEO Russell Dick has helped dispel concerns by citing similar concerns in Hoonah as Icy Strait Point was developed and has opened for operation.

“They typically try not to put any strain on the existing health facilities whatsoever,” Dick said, addressing the concerns about emergency services, noting that cruise ships tend to handle their own passengers except for the most serious cases.

Icy Strait Point has been carefully developed to showcase native Alaskan crafts, artists, and retailers, highlighting unique Last Frontier experiences with a minimum of environmental impact. The partnership between Hoonah Totem Corporation and Klawock Heenya is sure to keep local interests at the forefront of the development.

Though the 2022 Alaska cruise season is only weeks away from ending, Klawock is already looking ahead to the first ship visit in 2023.

The first – and thus far, only – ship planned to visit Klawock is Oceania Cruises’ Oceania Regatta, which has a guest capacity of 684 passengers at double occupancy. The ship is scheduled to visit Klawock four times in 2023 – May 24, June 30, July 10, and August 10.

Each visit is part of a separate itinerary as the luxury ship plies Alaskan waters from various homeports, including Los Angeles, Vancouver, and Seattle.

While the initial cruise dock development will only accommodate smaller ships with 500-700 passengers, future development may be able to welcome larger vessels as the port facility is expanded.

This could provide a new and exciting option for multiple cruise lines, particularly when other ports may be unavailable, such as the difficulties Skagway has faced with rockslides in recent weeks. Exactly what attractions and tour options may be available in Klawock remain to be seen, but stay tuned to Cruise Hive for more information as this port is developed.