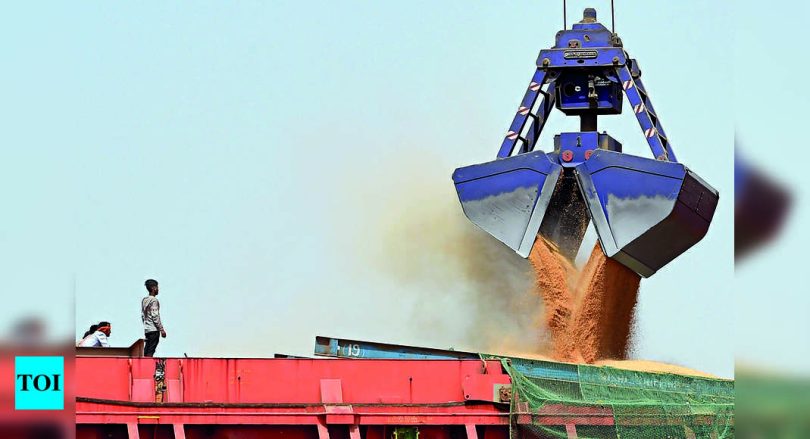 Ahmedabad: The Gujarat high court sought responses from the Centre and the director general of foreign trade (DGFT) over a petition filed by an exporter seeking limited permission to export some 27,000 metric tonnes of wheat lying at a port and some warehouses because the stock was advanced to meet prior commitments.
By a circular issued on May 13, the Centre banned the export of wheat, but a couple of days later allowed export of wheat stocks already piled up at ports. The petitioner in this case, Gujarat Ambuja Export Ltd made it clear that it did not intend to challenge the Union government’s prohibitory circular, but wanted permission under two exceptions provided in the circular that those wheat stocks be allowed to be exported which have already been advanced to meet prior commitments and to limited countries.
On Friday, the petitioner’s advocate H S Tolia submitted that 27,746 MT of wheat has been lying at a port and at various godowns. There is 14,327 MT at Kandla port and nearly 13,400 MT at godowns in Mandsaur, Pithampur and Kadi. These stocks were already at an advanced stage of export to meet prior commitments to various parties abroad. All the formalities regarding this stock are already complete. If the company is not allowed to export it, no one will purchase these goods, which are lying at the port and godowns.
The lawyer also submitted that since the contract was already inked and non-supply of goods would entail the company paying a penalty or recovery. The failure to export the wheat would also incur the liability of paying damages for non-performance of the contract.
After a preliminary hearing, Justice A S Supehia issued notice to the Centre and DGFT asking for their replies before the next date of hearing, June 30.