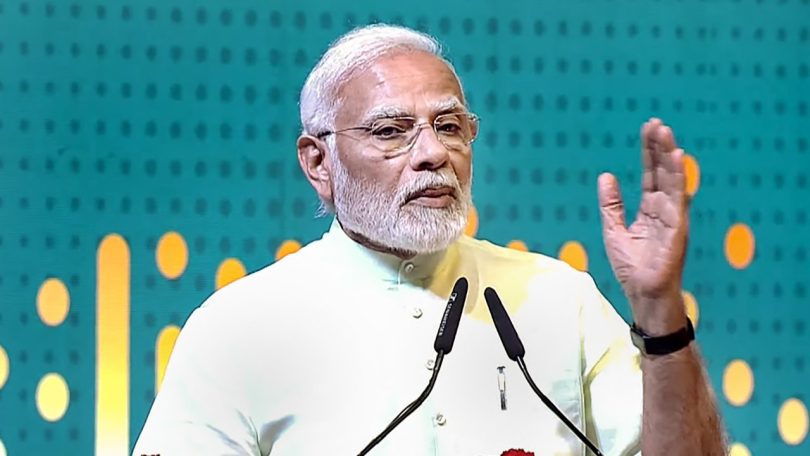 Prime Minister Narendra Modi will visit Maharashtra on Tuesday to inaugurate Jagatguru Shrisant Tukaram Maharaj Temple at Dehu in Pune and other events.

Jagatguru Shrisant Tukaram Maharaj Temple in Dehu is dedicated to Sant Tukaram, a Warkari saint and poet, famously known for Abhanga devotional poetry and community-oriented worship through spiritual songs known as Kirtans. Sant Tukaram lived in Dehu. A Shila Mandir was built after his demise but it was not formally structured as a temple. It has been rebuilt in stone masonry with 36 peaks, and also carries an idol of Sant Tukaram.

In Mumbai, Modi will inaugurate the Jal Bhushan Building and Gallery of Revolutionaries at Raj Bhawan in Mumbai.

Jal Bhushan has been the official residence of the Governor of Maharashtra since 1885. Upon completing its lifespan, it was demolished and a new building was sanctioned in its place. The foundation stone for the new building was laid by President Ram Nath Kovind in August 2019. All distinctive features of the old building have been preserved in the new building.

In 2016, then Governor of Maharashtra Vidyasagar Rao had found a bunker in Raj Bhawan. It had earlier been used by Britishers for secret storage for arms and ammunition. It was renovated in 2019.  The Gallery has been developed in the bunker as a museum to commemorate the contributions of freedom fighters and revolutionaries of Maharashtra. It offers tributes to the contributions of Vasudev Balwant Phadke, the Chaphekar brothers, the Savarkar brothers, Madam Bhikaji Cama, V B Gogate, Naval Mutiny in 1946, among others.

The Prime Minister will also participate in the bicentenary of Mumbai Samachar at Bandra Kurla Complex in Mumbai.

The printing of Bombay Samachar was started on July 1, 1822 by Fardunjee Marzbanji as a weekly and was made a daily in 1832. The newspaper has been published continuously for 200 years. To commemorate this unique feat, a postal stamp will also be released on the occasion.