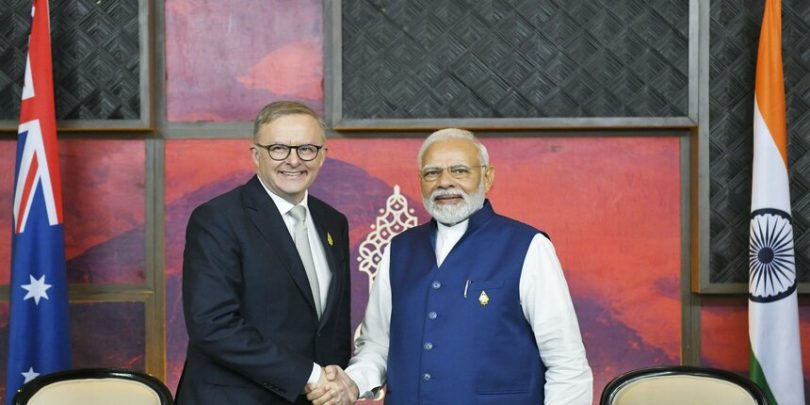 Prime Minister Narendra Modi on Wednesday met his Australian counterpart Anthony Albanese on the margins of the G-20 summit here and discussed ways to further cement the Comprehensive Strategic Partnership with a focus on cooperation in education and innovation sectors. Prime Minister Modi is in Bali to attend the two-day G20 summit which opened here on Tuesday. Sharing photographs of the meeting on Twitter, PMModi said he also had discussions with Albanese on increasing trade and maritime co-operation.

“Glad to meet PM Albanese. Discussed ways to further cement the Comprehensive Strategic Partnership, with a focus on cooperation in education, innovation and other sectors. We also talked about increasing trade and maritime cooperation. @AlboMP,” PM Modi tweeted.

In December 2020, India-Australia bilateral ties touched a new high with the Comprehensive Strategic Partnership, signing key agreements, including a landmark pact for reciprocal access to military bases against the backdrop of their frosty relationship with China.

The two countries have also played a key role in stabilising the strategically important Indo-Pacific region amid China’s aggressive posturing. India is among Australia’s top-tier trading partners, with a two-way trade in goods and services having grown in value from USD 13.6 billion in 2007 to USD 24.3 billion in 2020, according to the Australian Government, Department of Foreign Affairs and Trade.

(Except for the headline, this story has not been edited by Careers360 staff and is published from a syndicated feed.)