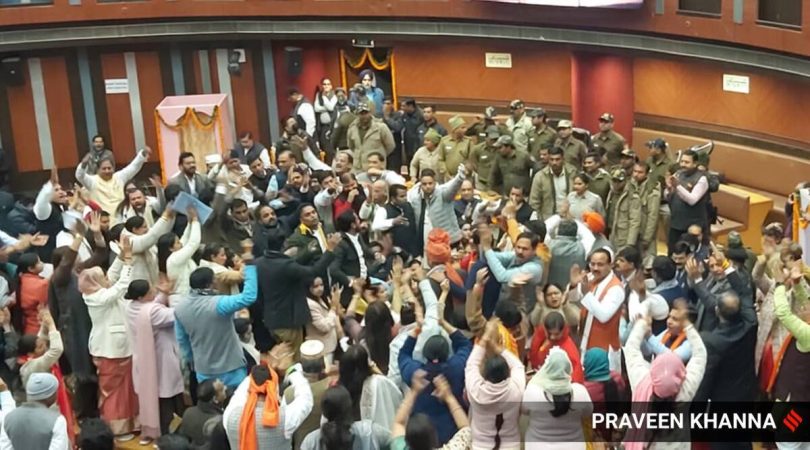 The issue of non-payment of salaries to doctors in mohalla clinics in the city gathered momentum, with Delhi Deputy Chief Minister Manish Sisodia writing to Lieutenant Governor V K Saxena, demanding action against officers who allegedly tried to “stall the system”.

Sisodia also demanded that an FIR be lodged against the “errant” officers. In the letter, Sisodia alleged that officers had told him personally that the L-G had told them to not clear payments before elections are over.

“They come to the village only during elections,” says Panna Devi. “Iss gaon se CM ban liye, aur kayi MLA, par gaon mein gareebon ke liye koi swaasthya ki suvidha nahi… (This village has given chief ministers, MLAs… but it does not have basic health facilities for the poor).”

Panna Devi is a resident of the “VVIP village” of Chautala in Haryana’s Sirsa district, dubbed the nursery of Indian politics and home to the ancestors of Devi Lal, the former deputy PM and Haryana ex-chief minister, and his son Om Prakash Chautala, also a former CM.

But it is also rapidly gaining a different, unwanted reputation — as a backwater of health facilities plagued by shortages in staff and equipment.

The Delhi High Court recently directed the Delhi State Legal Services Authority (DSLSA) to pay Rs. 5 lakh to the family of an auto-rickshaw driver who was killed in an accident. The direction came after his family alleged they had been deprived of compensation under the Motor Vehicles Act as those responsible for the driver’s death had not been caught.

A single judge bench of Justice Prathiba Singh while disposing of the matter on January 10 asked DSLSA to bear in mind “whether any amount has been received from the Insurance Company or not” while awarding compensation to victims or dependants in cases pertaining to death or a case grievous injuries. The high court directed DSLSA “to release a further sum of Rs.5,00,000/- to the Petitioner No.1 – widow of the deceased, which she would use in the manner as she deems appropriate, for the welfare of the children and for the family”.

Officers said the fire started from the second floor and spread to the third.

A fire broke out at a four-storey commercial building in Mundka on Sunday where nearly 27 persons were charred to death last year in a massive fire, officials said. The fire broke out in the afternoon on the second and third floors of the CCTVs and router manufacturing and packing unit.

On Sunday, a fire broke out at 4.45 pm in the same building. Officers said the fire started from the second floor and spread to the third.

“It was a big fire. We sent six fire tenders to the spot and the firefighters worked tirelessly to control and douse it. The cooling operation lasted till at least 9 pm. Nobody was injured and the fire was doused,” said Delhi Fire Services Chief Atul Garg.