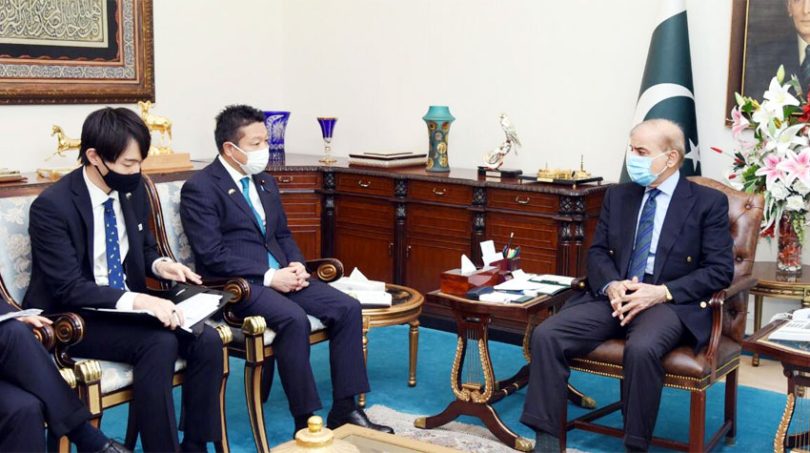 Talking to Parliamentary vice Minister for Foreign Affairs of Japan Honda Taro who called on him in Islamabad on Wednesday, he underlined the importance attached by Pakistan to its long-standing ties with Japan.

Highlighting the cordial and cooperative bilateral relations, the Prime Minister appreciated the support provided by the Government of Japan for infrastructural and socio-economic development in Pakistan.

He stressed that bilateral cooperation must be further expanded in trade, investment, IT, renewable energy and other related fields.

Appreciating investments by the Japanese enterprises in Pakistan over the past many years, he assured that the Government would make all possible effort to help further scale up such investments.

The Prime Minister also stressed the importance of high-level exchanges between the two countries.

The Parliamentary Vice Minister for Foreign Affairs expressed sympathy and condolence over the human and material losses caused by floods in Pakistan.

Reaffirming Japan’s commitment to further strengthening bilateral relations with Pakistan, he thanked the Prime Minister for his personal efforts in deepening Pakistan-Japan cooperation.

He conveyed Japan’s continued commitment to Pakistan in terms of enhanced trade, investment and socio-economic development. He also briefed the Prime Minister on the contribution of JICA in Pakistan, especially in areas of health, water, sanitation, and disaster relief.

The Prime Minister highlighted the dire situation in Indian Illegally Occupied Jammu and Kashmir and underscored the need for peaceful resolution of the Jammu and Kashmir dispute for durable peace, security and prosperity in South Asia.