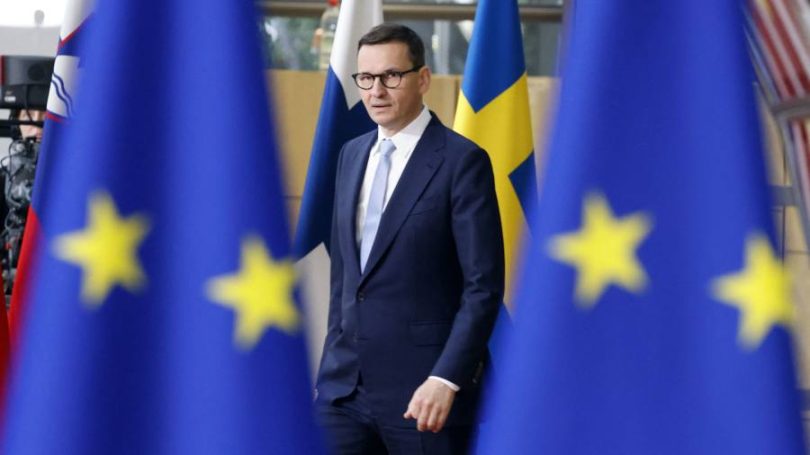 The EU should prioritise other measures over a windfall levy on power producers, Poland’s prime minister said, in a sign of possible divisions over Brussels’ plan to help consumers through the energy crisis.

Ahead of an EU emergency energy meeting on Friday, Mateusz Morawiecki suggested that a temporary suspension of the EU emissions trading scheme to help lower electricity costs would give “a response to Putin, showing him that we are able to very quickly react”.

In contrast, the windfall corporate levy proposed by the European Commission would take far longer to bring down soaring electricity prices for European households because it would “require redistribution thereafter”.

“We do not exclude some taxation on those who have extraordinary profits but there are other instruments which should be triggered as well, even ahead,” Morawiecki said in an interview. He envisaged a suspension of the ETS for 1-2 years or a significant lowering of prices for carbon permits.

The Polish leader’s warning suggests that, far from resolving the crisis, the EU emergency meeting on Friday in Brussels could expose new disagreements among member states about how to respond to Russia’s decision to close its main gas pipeline until sanctions against Moscow are lifted.

Brussels is proposing a levy on “enormous” revenues generated by non-gas electricity producers that would be rerouted to member states to support vulnerable households and companies, said European Commission president Ursula von der Leyen on Wednesday.

But Morawiecki also warned against giving Brussels a larger role in setting tax policy, which should be left in the hands of EU member states, even if the energy crisis triggered by Russian supply cuts in response to western support for Ukraine required an extraordinary response.

“I believe they are already usurping extra competences which are not in the [EU] treaties, and this is why we are very sceptical about giving an inch of additional competences to the EU institutions,” he said.

While the EU’s energy markets should be more interconnected, Morawiecki argued that an EU response to the energy crisis could not ignore the major differences between member states, such as those that rely more on nuclear or renewable power.

“Pretending that it is very easy to have one energy policy is very wrong: one size does not fit all. All member states have to have their own idiosyncratic solutions for their energy systems and climate neutrality aspirations,” he said.

To respond to President Vladimir Putin’s “weaponisation” of energy, Morawiecki called for a freeze on “irrational policies by the EU institutions that could create huge pressure on energy intensive sectors” such as fertilisers.

The Polish premier urged the EU to put the fight against climate change on the back burner “as it is now done in Germany, where they are turning on coal power plants again” to help the country meet its energy needs.

On Wednesday, Morawiecki also criticised Brussels for not disbursing funds more quickly to Kyiv, even though EU leaders had agreed a €9bn package for Ukraine in May. “Words are words, but I expect deeds coming after words.”

Morawiecki attributed the delay in sending funds to Ukraine to political differences over the war, prompted by “those who would like to end the war at any cost and go back to business as usual as quickly as possible”.

Still, the commission announced on Wednesday the release of €5bn of planned funding for Ukraine, raising the total to €6bn of the €9bn agreed in May.

Warsaw has itself been awaiting EU pandemic recovery funds that were frozen by Brussels because of a dispute over the perceived erosion of the rule of law in Poland.

Morawiecki said he remained confident that Poland would receive the earmarked €36bn in loans and grants. But he accused von der Leyen of not keeping her word when she said Poland should do more to safeguard its judges even after the EU executive body voted to grant the funds to Warsaw.

“She came at the beginning of June agreeing with everything and then under the pressure of radicals [in the commission] she changed her mind,” Morawiecki said.

Morawiecki stressed that his government would not propose further reforms to alleviate concerns about the rule of law in Poland, after its parliament endorsed in May the abolition of a disciplinary chamber for judges that had been at the heart of the dispute between Brussels and Warsaw.

“We have presented huge goodwill, we have changed our legislative system and abandoned our disciplinary chamber,” he said. If Brussels continues to withhold the pandemic funding, he added, “so be it. We will manage without it.”

Poland last month recorded a 25-year-high inflation rate of 16.1 per cent, which economists anticipate could push the country into a technical recession before year-end. On Wednesday the central bank raised its benchmark interest rate by 25 basis points.

Morawiecki acknowledged that a downturn could leave Poland with less than the 4.6 per cent of economic growth forecast in the national budget presented last week, but he said that Poland’s strong public finances still left it with room to increase debt if required.