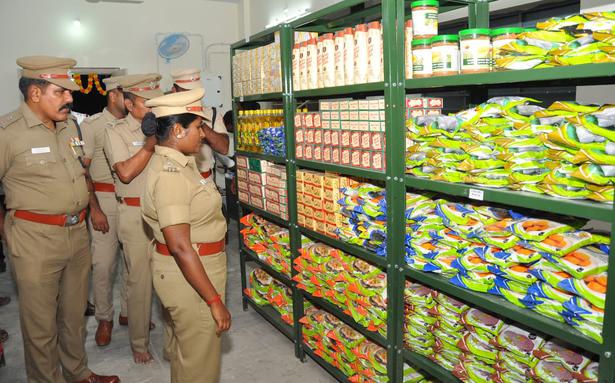 The facility will benefit over 2,000 personnel; items will be priced 20% lower than normal

The facility will benefit over 2,000 personnel; items will be priced 20% lower than normal

More than three years after its formation, the district police in Ranipet and Tirupattur got a new police canteen.

Director-General of Police (DGP) C. Sylendra Babu inaugurated the new facility through a video conference. The canteen was set up on the Armed Reserve (AR) premises in these districts. Families of serving, retired and deceased police personnel, prison staff and Fire and Rescue Services personnel are eligible to use the facility. It will benefit more than 2,000 police personnel in these districts.

Officials said items would be priced 20% lower than in the open market. Currently, around 15,000 products., such as consumer durables, household articles, electrical and electronic articles and groceries, are on sale.

However, officials said there were purchase limits in place depending on ranks. Beneficiaries were issued with smart cards to buy things in the canteen. The canteen initiative was introduced in Chennai, Tiruchi and Madurai little over a decade ago, in 2011.