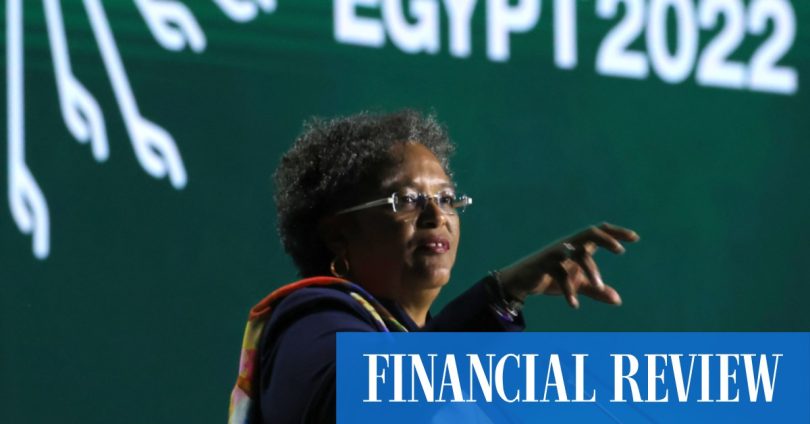 She suggested many developing countries might now turn to natural gas as “a clean bridge” to net-zero emissions.

United Arab Emirates Crown Prince Mohammed bin Zayed said his country would keep pumping gas as long as there was demand, describing the UAE as a “responsible” gas producer.

Ms Mottley saved her sharpest barbs for oil and gas companies, saying they “and those who facilitate them” should be “brought into a special convocation” by this time next year, which would discuss their financial obligations to climate-distressed countries.

“How do companies make $200 billion in profits in the last three months, and not expect to contribute at least 10 cents in every dollar profit to a loss-and-damage fund?”

“The lengthy discussions at COPs, with its stalling, delaying tactics and procrastination that have hampered implementation and delivery, is simply cruel and unjust,” he said.

“Loss and damage is not an abstract topic of endless dialogue. It is our daily experience and the living nightmare of millions of Kenyans and hundreds of millions of Africans.”

Leaders from countries as diverse as the Central African Republic and the Seychelles were similarly cutting in their comments about the rich world.

The fortnight-long COP27 talks are expected to grapple with the issue of poor countries’ loss and damage for the first time, as costs and compensation for developing and vulnerable nations dominate the summit.

UN Secretary-General Antonio Gutteres broadened that out into Asia, saying Pakistan’s floods made it a deserving candidate for loss and damage compensation.

“Pakistan deserves massive support directly from the international community. Pakistan deserves loss and damage to be considered as a reality and for that reality to be recognised through financial mechanisms that I hope this conference will be able to decide,” he said.

Ms Mottley had previously worked her preoccupation with debt levels and borrowing costs into a September document called the Bridgetown Agenda, has been resonating among other emerging-market nations.

It proposes reallocating at least $US100 billion of unused Special Drawing Rights to those who need it to mitigate, adapt to or repair the damage from climate change, alongside other emergency liquidity measures to “stop the debt crisis in its tracks”.

This would then be supplemented by fresh SDRs and loans to build climate resilience in vulnerable countries, creating a global mechanism to replace country-by-country parleying.