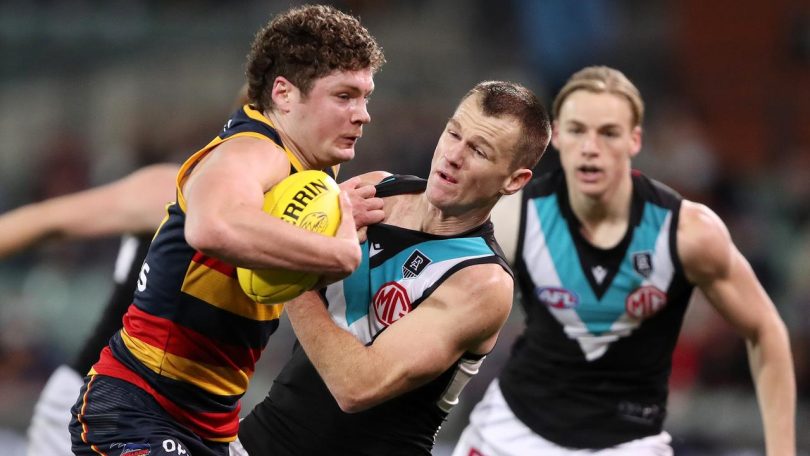 Port Adelaide have set the tone for a spicy Showdown in Power great Robbie Gray’s final AFL game, with plenty of barbs thrown at their rivals.

The Power (9-12, 107.1%) will want to end their season on a high and get revenge for the thrilling after-the-siren Showdown loss back in Round 3.

Adelaide (8-13, 88.9%) are looking to square the Showdown ledger at 26 wins apiece with victory at Adelaide Oval.

There were no late changes for the match with Riley Bonner (Port Adelaide) and Ben Davis (Adelaide) the medi subs.

This match gets underway at 7.30pm AEST from Adelaide Oval.

Follow Port Adelaide v Adelaide in our live blog below!

Robbie Gray was almost off to the perfect start in his final match, as he appeared to take a mark inside 50.

But when the touch call came, he got the hands out to set up Todd Marshall for the Power’s first.

But it was Adelaide who brought the heat as they smashed the Power through the centre.

Finlayson was penalised for holding the ball and was then marched to the goal line for dissent.

“There was nothing in that,” commentator Dermott Brereton said.

“It must have been for more than the arms (gesture).”

Rory Laird slotted the goal and absolutely gave it to the crowd as his teammates ran in to celebrate.

The match turned into an arm-wrestle for the remainder of the opening term, before a late Xavier Duursma goal edged the Power in front at the first change.

Neither side could establish clear dominance in the second term as the match turned into end-to-end footy.

Todd Marshall slotted the first of the term before Jordon Butts’ bizarre decision to kick to a 3-1 inside 50 cost the Crows.

The footy easily rebounded out of defence with Ollie Wines hitting up Robbie Gray for a moment that brought the fans to their feet.

Gray slotted his first for the night in his final match as Port had a 13-point lead.

But once again Jeremy Finlayson’s ill disciplined cost the Power a goal.

Fogarty had taken the grab inside 50, but his set shot became a certainty when Finlayson “mouthed off” to an umpire in the centre of the ground.

“His discipline has let him down a couple of times now,” commentator Brenton Speed lamented.

If you can’t see the blog, tap here.