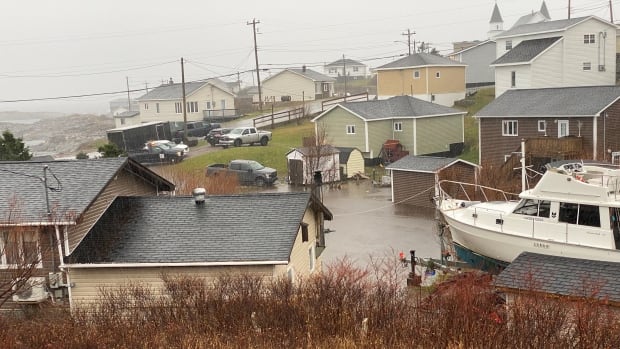 A rainstorm brought flooding and other complications to Port aux Basques on Saturday, as the town continues to grapple with the devastating effects of post-tropical storm Fiona.

“Anytime we’re having weather such as what we had yesterday, it becomes very stressful for both our crews and for staff, and for the residents, because there’s still a lot of unknowns,” said the town’s Mayor Brian Button.

“Fiona is trying to keep a long legacy here, and it hasn’t let up.”

The remnants of post-tropical storm Nicole hit much of Newfoundland on Saturday with a mixed bag of weather, with many areas across the island experiencing snow, heavy rain and ice pellets.

The residents of Port aux Basques are no strangers to rain, but due to significant infrastructural damage caused by Fiona, Button said Saturday’s rainstorm brought a series of new challenges.

Button said town crews were responding to calls all day, attending to issues such as flooding basements and sewer back-ups.

“We were having so many calls that we had to bring in additional staff,” said Button.

“We had to bring in some extra crews … because there was just too many calls for the crews that we did have out to answer and respond to.”

Some residents whose homes weren’t affected by Fiona experienced damage for the first time on Saturday, said Button, while other residents discovered damage they weren’t previously aware of, such as a plugged up storm drain.

“I know for myself yesterday, you’ve had people saying, ‘You need to take a break,'” said Button. “But when that weekend comes and this type of weather comes, it becomes a very stressful event.”

When Port aux Basques resident Rosalyn Roy arrived home Saturday afternoon, she says she noticed flooding at Big Bridge Hill, which is just a street away from her house.

Roy, who works with the independent newspaper Wreckhouse Weekly, said she got out of her car and stood in the pouring rain to take a picture of the flood. She said crews from the town quickly arrived to drain the area.

“You could see the water levels going down,” said Roy. “They did an awesome job of just responding quickly so it wouldn’t damage homes or anything like that.”

Roy said many residents are used to heavy rainfall, so Saturday’s rainstorm didn’t come as an immediate cause of concern or shock. She said at this point, residents look at the situation as just another thing they have to overcome.

“Normally this would be no big thing,” said Roy, “but because Fiona has damaged a lot of the shoreline infrastructure… this turned into a minor flooding situation. Normally, it wouldn’t be the case.”

The rainstorm tapered off heading into Sunday, so Button says the town will continue clean-up efforts and attempt to fix damage caused by Fiona, some of which he hopes to solve before the town heads into winter.

“People are on edge every time we have a weather forecast that comes in, so we’re trying to work through that as well,” said Button.

“Fiona left us in quite the mess.”