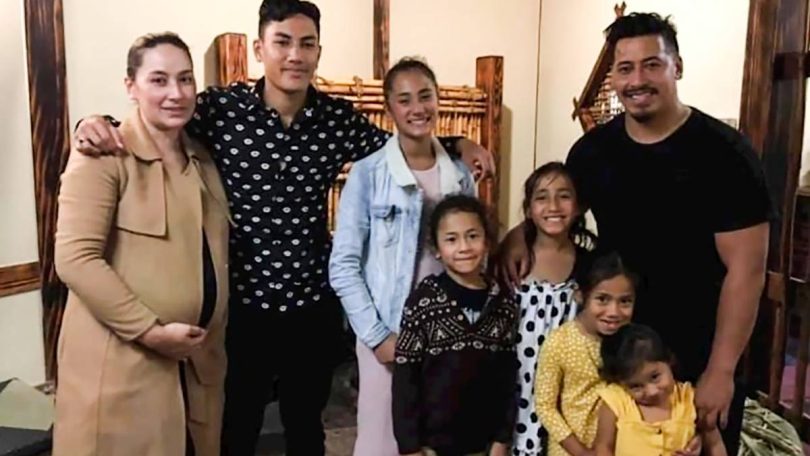 Pala’amo Kalati (right) with wife Dro and six of their seven children: Jairus, Mischa, Azra, Braxton, Sarai and Iman. Kaliti was killed in an accident on August 30, 2020. Photo / Supplied

A two-year delay to the trial of former Ports of Auckland chief executive Tony Gibson on charges related to the death of a worker crushed under a container has angered family of the father-of-seven and “outraged” the maritime union.

The former Ports chief executive was charged on August 13, 2021, a year after 31-year-old stevedore Pala’amo (Amo) Kalati was crushed when a container was dropped during a lifting operation on a night shift.

Kalati’s brother-in-law, Gareth Fraser, told the Herald his seven children “still aren’t coping very much at all” two years after his death at the Fergusson Container Terminal on August 30, 2020.

“They still have their moments and my sister still has bad days and good days. But those bad days are not as bad anymore,” Fraser said, who has acted as the family’s spokesman.

The Herald understands the Kalati family is still negotiating a financial settlement with POAL.

Gibson’s charges under the Health and Safety at Work Act are unprecedented for an executive of a major New Zealand company and could bring $400,000 in fines if he is found guilty.

Gibson was scheduled to appear in the Auckland District Court on May 24 to plea to the charges, but a written not guilty plea was made and the hearing was postponed to October 10.

The Herald can now reveal Gibson’s first hearing has been delayed again until 2024.

Fraser said the Kalati family were “very frustrated at the whole process” and “feel that the death was in vain as nobody has been held accountable and it’s business as usual with yet another death at the Ports of Auckland since [Kalati’s death]”.

Fraser was referring to the April 19 death of yet another stevedore at Ports of Auckland [POAL]: 26-year-old new father Atiroa Tuaiti, who was a contractor for Wallace Investments.

The death of Tuaiti marked the fourth death at the POAL since 2017 and led Workplace Relations and Safety Minister Michael Wood to order a review of ports operations nationwide.

“And Maritime [Union], WorkSafe, the Government haven’t done f*** all. What everyone says: ‘They’re doing reviews’ but people are still dying at this place.

“If you contract out you should still have the overall say in health and safety and make sure that everybody across the board is safe and able to go home to their families.”

Gibson was charged under Section 48 and 49 of the Health and Safety at Work Act, which relate to offences of “failing to comply with duty that exposes individual to risk of death or serious injury or serious illness”.

Gibson’s lawyer John Billington, QC, confirmed to the Herald the former chief executive had pleaded not guilty in May to the two charges.

Billington said the delay to Gibson’s case until 2024 was a “reflection of the current system” and was in the courts hands, not theirs.

Maritime Union of New Zealand treasurer Russell Mayn said he was “very disappointed” in the court postponement and it potentially put at risk the safety of port workers in the interim two years it will take for Gibson to face a judge.

“It seems [incredible] that something of such importance could be delayed for that time. I’m not sure what the reasons are,” Mayn said.

“I can’t understand how the system could allow that to go out for so long. I mean it just doesn’t seem reasonable in any way or form that it should be allowed to happen.”

Mayn said the Maritime Union’s lawyers had been asked to investigate the justification for the two-year postponement.

“It’s of real public interest, because this is the first CEO to be taken to task over health and safety issues,” Mayn said.

“It also has the ability to apply pressure to other companies in New Zealand to make sure they get their act together, so it may protect other workers from being killed on the job. So there’s a bit more than public interest when you look at it from that aspect.

“Our members are outraged. If one of our members does something like that it’s dealt with very efficiently by not only the companies but by the court system. If he [Gibson] was to be convicted that means he’s got to relinquish his job as trustees or board members or all of that. This has just bought more time to sit at those positions.”

New Ports of Auckland chief executive Roger Gray took over the top job this year after Gibson resigned in May 2021.

Gibson had come under intense media scrutiny and union pressure to vacate the role after the release of a port review by Construction Health and Safety New Zealand (CHASNZ) in March 2021.

Mayn said in light of the repeated delay to Gibson’s hearing, the Maritime Union members had “lost faith” with the POAL board and their lack of direct accountability for the port’s terrible recent safety record.

“There are questions in the ability of the board who are supposed to be there for governance,” Mayn said.

“They are responsible, those board members, and not only did they fail abysmally in health and safety, but they failed with the automation process. Our membership has lost all respect or faith in boards. They just say ‘how can this happen?'”