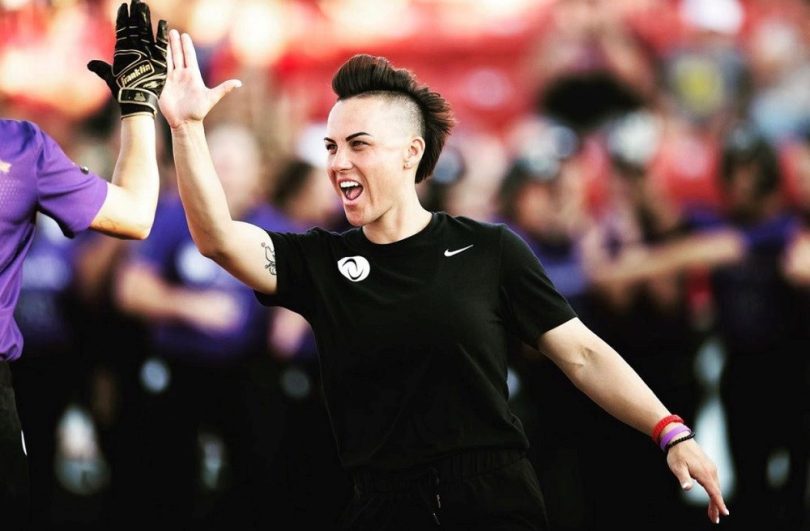 A Port Coquitlam Olympic bronze-medalist will be wearing gold next year.

Jenn Salling continues to grow her resume as she was recently named assistant head coach of the University of Central Florida (UCF) softball team in preparation for the 2023 season.

The Knights made the sweet 16 round of the NCAA Div. I College World Series after completing a 2022 season record of 49-14 and claimed the American Athletic Conference (AAC) championship banner.

Salling said she’s looking forward to returning to UCF in a full-time coaching position after serving as a volunteer with the school from August 2018 and February 2019.

“The gratitude and support I feel in my heart from everyone as I pursue this next step in my life, is seriously unbelievable,” the 35-year-old two-time Olympian explained in a social media post.

“I want to thank Coach Cindy Ball-Malone and the UCF Athletic Department for the opportunity to be apart of Knight Nation….build upon the expectations and standards of excellence that it takes to be an NCAA Division 1 National Champion,” Salling added in a news release.

“Her knowledge of the game and passion for human/player development is what I admire most about Coach Bear. She knows how to win, she knows what it takes to win and I wholeheartedly respect and believe in how she goes about the process to winning, both on and off the Softball field.”

After winning the bronze at the Tokyo 2020 Summer Games with Canada, Salling joined the national-governing body in November 2021 as an assistant coach as well.

She placed her cleats on home plate at Fukushima Azuma Baseball Stadium after defeating Mexico 3-2 in the third-place match, then shared the photo on social media to announce her retirement as an active player.

“A symbol of letting go and closing this chapter of my life,” she said.

Salling joined the national team in 2006 and she was among the program’s youngest players when Canada finished fourth at the 2008 Summer Games in Beijing.

Between Olympics, she played in four Pan American Games, earning one gold medal and three silvers, as well as five women’s world championships.

Her love of softball started at the age of five in Port Coquitlam with its minor association.