“Port de València” can already be seen from today at the top of the Valencian port area. The historic water tank of the former Unión Naval de Levante, one of the architectural elements that the Demetrio Ribes Chair identified as a port landmark to be preserved, has been fully restored by the Port Authority of Valencia (POV) and painted with the corporate colours of the port administration (blue and white) to give greater visibility to the name of Port de Valencia, both from land and from the sea side.

This restoration work is one of the actions that the POV is going to undertake in the coming months to conclude the restoration of the Unión Naval warehouses which, in the future, will house the new passenger station of the Valencian port. In this sense, it is a minor work, but one of great symbolism for the port because of its involvement with its surroundings.

For the restoration of the historic tank and its reinforced concrete tower, the reinforcements affected by cracks and fissures have been recovered and treated, the corrosion of the rusted structures has been eliminated and the pre-existing coatings have been recovered, sealing the concrete and painting the whole structure with a material that withstands extreme weather conditions of sun, humidity, heat and cold.

Its origins date back to 1916, when José Juan Dómine founded the Transmediterránea Company with the union of various shipping companies, including Talleres Gómez, for the construction of a shipyard next to the Poniente quay. 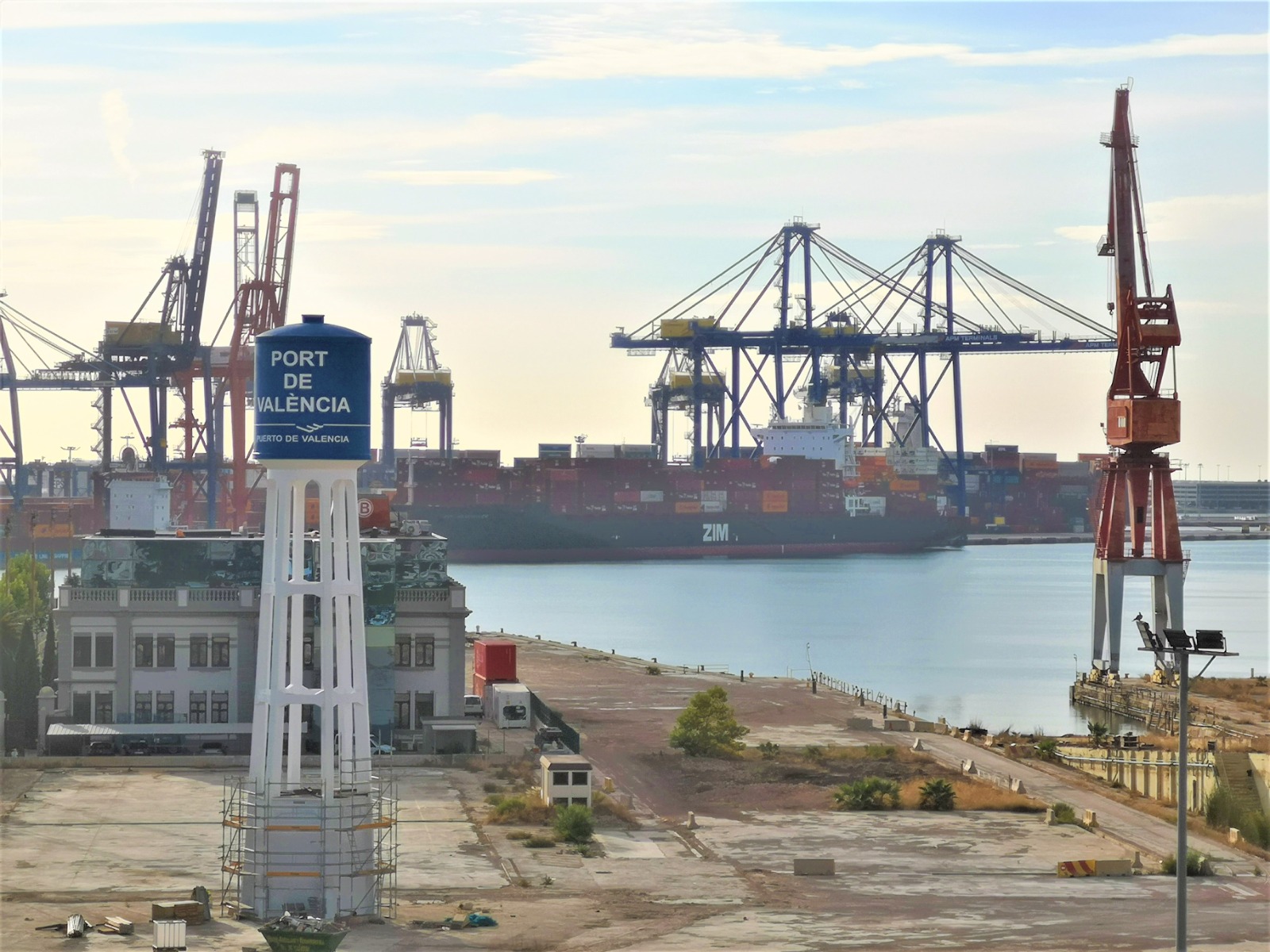 On 17th November of 1917, the definitive concession for the construction of these shipyards was granted. The project and the works were directed by the engineer Justo González Garrido. These began with the diversion of the Turia seawall and the levelling of land, reclaiming 16,568 m2 from the sea. After that, between 1918 and 1920, the foundations were laid, the railway tracks were installed and the workshop buildings were built, with the installation of the crane-towers in progress and only the beginning of the foregrounds and slipways still to be built.

Due to the economic crisis of the 1920s, investment had to be reduced, so it was decided to create a separate entity for the shipyards’ activities. Thus, on 11th April of 1924, the new company Unión Naval de Levante was founded in Barcelona, and its incorporation was carried out by Compañía Transmediterránea, Astilleros de Tarragona and Fried, Krupp Germaniawerft Aktiengesellschaft A.G.

In 1925, the three projected slipways were completed and the official inauguration of the València shipyard took place, at the hands of the Prince of Asturias, who laid the keel of the mixed vessel “Ciudad de Algeciras” (then christened “Miguel Primo de Rivera”). The ship would be launched the following year. At the same time, the construction of other cargo ships, passenger ships, oil tankers, armed transport ships and even the first electric propulsion ship built in Spain began: the “Artablo”.

During the Civil War, the shipyards were seized and their activity was based on the production of armaments, tanks and armoured cars. For this reason, as well as due to its strategic location in the port of Valencia, the industrial complex suffered numerous bombings from Italian planes allied to the rebel side. Both the ships and the slipways and cranes were seriously destroyed and had to be rebuilt in the years following the war.
Parallel to this reconstruction, the factory was also extended during the 1940s. The old Talleres Gómez were dismantled and their land was exchanged for land next to the Turia quay and on the old Paseo del Caro, where new facilities for workshops and machinery were built. The floating dock was also moved to the new armaments dock, a new slipway was built (slipway IV, later called slipway 2) and the conditions and training of the employees were improved with the new Apprentices’ School, commissary and library.

Talleres Gómez was founded in 1878 in Santa Ana del Grau street. Its facilities were moved in 1906 to the Poniente quay; there it built and repaired machinery in general, especially for fishing vessels. Until its dismantling after the Civil War, the workshops would remain annexed and would complement the work of the shipyard by repairing ships and building marine machinery and boilers, diesel engines, railway material and iron and metal foundry.

The engineers José Rodríguez Carracio, Salvador Canals Álvarez, Luis Dicenta, Estanislao Tintoré, Mr. Beaty and Mr. Scott also collaborated. 4 In 1946, the Transmediterránea Company managed to acquire almost all the share capital of the shipyards. In the 1960s and 1970s, Unión Naval was linked to the Banco Central group and, later, to Banco Santander Central Hispano. In 1983, as a result of the process of creating subsidiaries, Unión Naval Valencia and Unión Naval Barcelona were created, which were acquired in 1999 by the Boluda Group. As a result, production specialised in the repair and mass production of standard and salvage vessels, harbour and offshore tugs, oil tankers and fuel supply barges.

The Port Authority has rescued the concession of the historic Unión Naval complex to house the future regular line passenger and cruise ship station. A project unanimously approved by the POV Board of Directors that will be developed safeguarding the historical elements and buildings – such as the now recovered water tank and tower – as indicated by the Demetrio Ribes Chair of the University of Valencia.
Source: Port Authority of Valencia