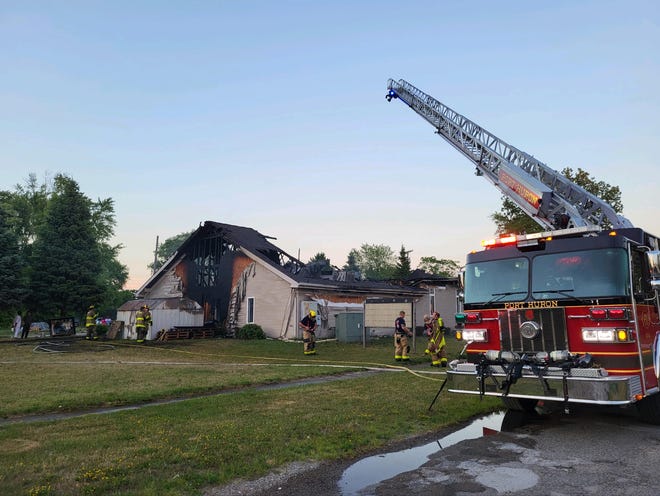 Pastor Kim Brown said no one was inside Zion Cathedral of Praise Church early Tuesday evening when a fire broke out, leaving the building on Port Huron’s south side a total loss.

More than two hours after fire crews from four departments arrived, she sat nearby surrounded by a group of supporters — all of them praising God in gratitude.

Port Huron Fire Battalion Chief James Hayes said the blaze was reported at about 6:15 p.m. at the church, which is located at Moak and 30th streets.

While the fire was under control within 30 to 45 minutes, he said, water was still being sprayed on the building shortly before 9 p.m. to control hotspots.

Hayes said part of the church was fully engulfed in flames upon their arrival. The origin of the fire remained unclear, and it remained under investigation as of Tuesday night. No injuries were reported.

“You could tell all through the eaves, and it started coming up through the roof vents,” Hayes said. “They grabbed handlines, set up the aerial, and started spraying, and all the other crews showed up.”

A staple to advocacy and among the local Black community, Zion has a history spanning more than eight decades.

In 2020, Brown told the Times Herald she began serving there as an assistant pastor close to two decades prior and had been senior pastor for roughly 10 years. The church had drawn her family from Detroit to Port Huron — much like that of Zion’s founding pastor, Irene Woods.

A portrait of the church’s five primary senior pastors over its history last sat at the entrance to the sanctuary, and Brown said it was saved by firefighters Tuesday. As was a picture of Martin Luther King.

The building destroyed in Tuesday’s fire was originally erected in the early 2000s, replacing a previous location at 24th and Moak streets.

In addition to church activities, St. Clair County Organizing for Regional Equity, or SCCORE, also operated out of Zion. Brown is the director of the group, which works with youth.

Although kids normally leave in the summertime by 3 p.m., participating kids were on a field trip Tuesday, Brown said.

Multiple supporters at her side late Tuesday reflected the arrival of other pastors and members from the local faith community to check on Brown and the church after the fire struck. One friend added, “We just hope the community continues to wrap their arms around her so we can get this church rebuilt.”

Brown, who planned to return to retrieve her cellphone, said she wasn’t sure what steps were next.

They still needed to determine where SCCORE would be hosted. But on Sunday, they planned to host church services at 11:30 a.m. on the grass outside.

“We will be right here. Giving God the praise,” Brown said.

“I am going to do what I always do, and that is praise my god through every situation, and I’m going to trust for the next steps and what it is we need to do to make sure our church family is healed and that we go forward,” she added. “We’re grateful for the love of our fellow pastors and those that are around.”