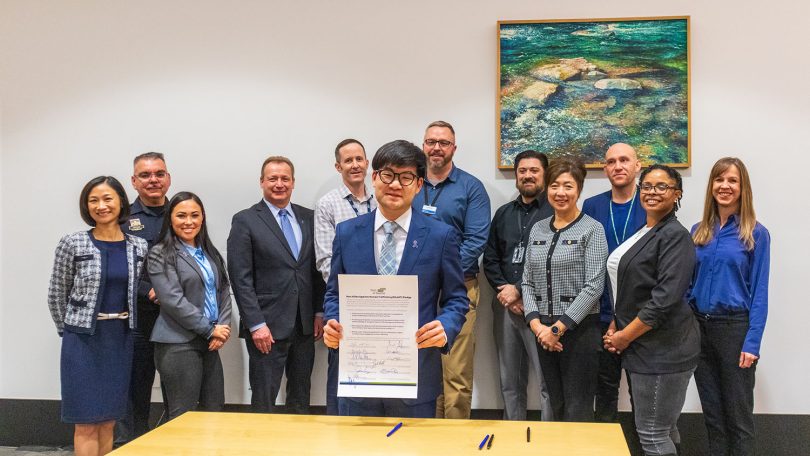 The latest statistics from the National Human Trafficking Hotline show that 955 signals (reports) were received in Washington state in 2021. Of those signals, 404 were from victims or survivors of human trafficking. Additionally, 233 cases involving 337 victims of trafficking were identified in the state. The hotline can be used to report suspicions and potential human trafficking issues, and it can provide help and resources, like medical care, financial assistance, housing assistance, or law enforcement assistance.

“Increasing awareness of human trafficking saves lives. This pledge will increase awareness of the signs of trafficking and how to report it, which is the best way to prevent and stop trafficking through Port of Seattle facilities,” said Port of Seattle Commissioner Sam Cho. “We are grateful to the initial signatories of the pledge and know that in the coming weeks and months more of our partners and tenants across SEA Airport and at our maritime facilities will join us to take the pledge.”

“Education and awareness are key to recognizing human trafficking at our gateway,” said Port of Seattle Commissioner Toshiko Hasegawa. “Active participation from pledge members will help to interrupt this monstrous underground economy.”

Organizations that sign onto the pledge are joining the Port in combatting human trafficking by:

To support PAAHT members, the Port will make anti-human trafficking trainings available in multiple, accessible formats to any worker at Port facilities, as well as making print and digital educational materials available in partnership with community-based organizations and survivors of trafficking.

Pledge members will also have access to the first proprietary anti-human trafficking training developed by a port authority, which the Port of Seattle created in partnership with Businesses Ending Slavery and Trafficking (BEST).

“Human traffickers often move victims through airports and seaports,” explains Mar Brettmann, CEO and Executive Director of BEST. “This next step by the Port of Seattle will provide valuable training and materials to help even more employees learn what they can do to help stop labor and sex trafficking in Washington. When more employees learn to recognize the signs of human trafficking, they can assist more people to be able to find freedom and hope.”

“Air travel can be misused by criminals harboring people and youth for the purpose of exploitation, which is why we train our flight attendants to look for signs of human trafficking on every flight,” said Gloria Chow-Vanderwell, managing director of inflight services at Alaska Airlines. “We applaud the Port for making training materials available to all airport employees who, together with airline employees, can help to put an end to human trafficking at SEA.”

In addition to the trainings, the Port of Seattle posted 310 signs in the restrooms and passenger loading bridges at Seattle-Tacoma International Airport, as well as 20 signs at Port of Seattle parks and 10 signs at Fisherman’s Terminal on how to report suspected trafficking. The signage includes language in eight languages beyond English, including Spanish, Tagalog, Korean, Chinese, Somali, Russian, Ukrainian and Vietnamese.

In its January 10 meeting, the Port of Seattle Commission approved a proclamation recognizing January as National Human Trafficking Prevention Month. Finally, the Port is proud to announce that it is one of the recipients of the US Department of Transportation’s 2022 Human Trafficking in Transportation Impact Award. This honor will provide $50,000 in funding for SEA to work with other airports around the country to develop standardized anti-trafficking messaging.

About the Port of Seattle

Founded in 1911 by a vote of the people as a special purpose government, the Port of Seattle’s mission is to promote economic opportunities and quality of life in the region by advancing trade, travel, commerce, and job creation in an equitable, accountable, and environmentally responsible manner.

Port operations help support nearly 200,000 jobs and $7 billion in wages throughout the region. Over the next 16 years, the Port’s Century Agenda seeks to create an additional 100,000 jobs through economic growth while becoming the nation’s leading green and energy-efficient port. Learn more at the Port’s website.