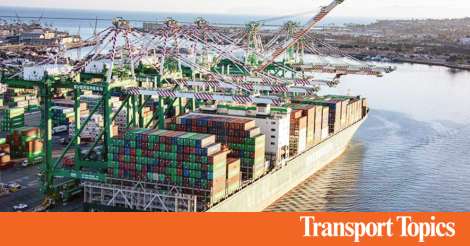 Through the first 10 months, Port Los Angeles officials say volume is down 6% from 2021’s record pace. (Port of Los Angeles)

[Stay on top of transportation news: Get TTNews in your inbox.]

As the International Longshore and Warehouse Union and the Pacific Maritime Association continue to negotiate, the head of one of the nation’s busiest ports said he thinks a labor agreement may not be reached until February.

“It’s not going to be soon. Even early days before the two parties sat down at the table, both leaders said we’re going to get a deal done,” Port of Los Angeles Executive Director Gene Seroka said. “We here at the Port of Los Angeles say let these experts, these seasoned negotiators, get their job done at the bargaining table, and the rest of us are going to do our jobs and move the cargo. From where I sit, we won’t have a deal this year.”

Seroka said a negotiated settlement early in 2023 is key to his port and 28 other facilities on the West Coast. Los Angeles has seen a steady decline in its container volume the last half of this year as many shippers have said they are moving cargo to Port Houston and even to the East Coast, including the Port of New York and New Jersey, the Port of Savannah, Ga., and others that have seen a significant spike in their business.

“Historically, the long end of these negotiations has got about a max of nine or 10 months, and that will put us into February, the first quarter at the latest,” Seroka added. “Bargaining is very hard. In addition to coastwide frameworks, salary, benefits and other key items, including automation, we have 29 ports with local supplements that have to be concluded and most of it is behind the scenes. This is a lot of work that has to be done in these negotiations.”

Seroka said he is speaking as an interested observer and not for either side.

The concern about the negotiations resulted in a big drop in container volume at two of the nation’s biggest ports on the West Coast.

Year-over-year cargo numbers were down 25% at the Port of Los Angeles. In October, the port processed 678,429 20-foot-equivalent units compared with 902,643 a year ago. Through the first 10 months, Los Angeles officials say volume is down 6% from 2021’s record pace.

Cargo volume dropped in October 2022 as the Port of Los Angeles handled 678,429 TEUs, a 25% decrease from October 2021, and about 6% down from last year’s record pace. https://t.co/cbOqFSLPVG pic.twitter.com/NnRqY5xfgY

Seroka said he has spoken to shippers to assure them that his port and others on the West Coast can handle the freight with no labor disruption.

“This is really disappointing to me. For the first time in all these years that I’ve been in this industry, both sides put out joint media releases, signed by both, saying there would be no strike and no lockout,” he said. “The ILWU has not gone out on strike since the early 1970s, and the importers and exporters have moved away from the West Coast ports, specifically Los Angeles, in the hope that moving their cargo to the East and Gulf Coast would be a better answer and it has not.”

Seroka said by moving the cargo off of the West Coast, it caused backlogs on the East Coast and Gulf Coast at a time when Los Angeles and Long Beach had more than enough capacity to handle the volume.

We’re trying to do our level best to get goods out for the holiday season and keep people on the job.

Some of these ports, Houston, the East Coast ports, New York-New Jersey, Savannah and even Baltimore have been backed up. This is not helping our economy, and it gives me no satisfaction to see my counterparts in these other locations when we’re trying to do our level best to get goods out for the holiday season and keep people on the job.”

Seroka said his port has the capacity to move the cargo now, and he is urging shippers to reconsider their decision, especially in light of the ILWU-PMA promise not to have a labor walkout.

New data shows steep declines in cargo volumes at leading #WestCoastPorts. Highlights the industry’s critical need to stay competitive and efficient to retain volumes, sustain our economy, and support jobs both on & off the docks.https://t.co/whldHnXous

“We’ve had a 25% drop, which means we’ve got 25% more capacity here in Los Angeles,” Seroka said. “While the other ports are unfortunately struggling, we can pick up the slack. We’ve got to get these retailers, importers, exporters to understand they have a viable alternative at Los Angeles.”

To back up Seroka’s point, the adjacent Port of Long Beach also saw a double-digit decline in TEU volume in October. Volume fell 16.7% to 658,428 containers compared with 789,716 year-over-year.

“Although the import demand in the U.S. appears to be softening, we have not seen any slowing in Houston in recent months,” Executive Director Roger Guenther said. “We are handling record amounts of cargo and remain focused on aggressive infrastructure development.”

On the East Coast, volume snapped back at Georgia’s Port of Savannah. The facility had its second-strongest month on record, processing 552,806 TEUs for a 9.3% increase over 505,347 a year earlier. October’s level also was up 26.7% from September, and the port is on track to easily exceed 2021’s record 5.6 million containers.

EXPANSION NEWS: The Georgia Ports Authority Board approves a plan to renovate and realign the docks at the Port of Savannah’s Ocean Terminal to better accommodate its expanding container operation. #GAPorts pic.twitter.com/Rv9nFiblU2

“There has been downward pressure on the total U.S. container trade related to inflation and a shift in consumer spending toward services such as restaurants and travel,” Georgia Ports Authority Chairman Joel Wooten recently said. “However, the Port of Savannah continues to outperform relative to the national market, driving new business for Georgia.”