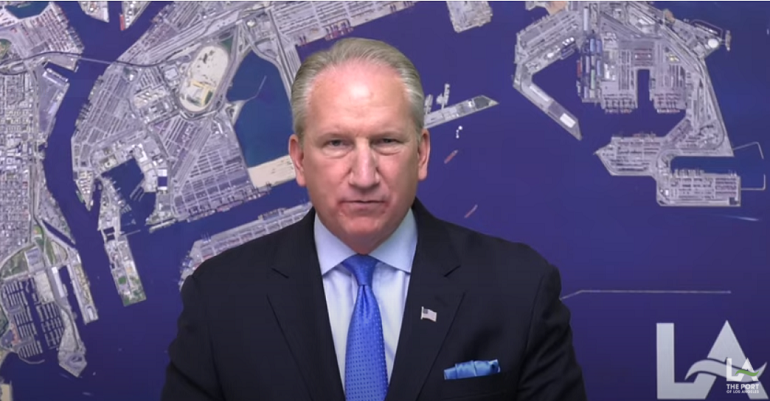 The southern Californian port saw estimated volumes of 935,345 teu in July this year, 2.5% above the previous record set in 2019. Record monthly volumes have been a theme at the Port of LA this year with records set in five of the first seven months of the year.

July loaded imports 485,472 teu up 3.2% on the previous year. While the volume figures for July are estimates little change is expected when official figures are published.

For the first seven months of 2022 the Port of LA handled 6.35m teu on par with the record volume pace of the previous year.

The port meanwhile is claiming success in removing backlogs of vessels waiting to berth.

Related: Record volumes and vessel queues for Port of LA in 2021

“Remarkably, we continue to move record amounts of cargo while working down the backlog of ships almost 90%, a huge accomplishment by all of our partners,” Port of LA Executive Director Gene Seroka said at news briefing on Wednesday. “Even with the current rail challenges, our marine terminals are more fluid than last year.”

In a turn up for books following the severe congestion seen in 2021 and into the start of this year the Port of LA now says in spare capacity compared to some of its competitors.

“Our terminals have capacity,” Seroka added. “For cargo owners looking to re-chart their course, come to Los Angeles. We’re ready to help.”

According to Descartes Datamyne data the average waiting time port of LA in July was 7.2 days down from 8 days in June.

Looking ahead import demand is expected to start to soften after two and half years of what Seroka described as “peak season” volumes. “Imports will begin to ease somewhat I expect to see that reflected in our August numbers,” he said.

You can watch the full media briefing with Seroka where he was joined at  by Matt Schrap, Chief Executive Officer of the Harbor Trucking Association, below: