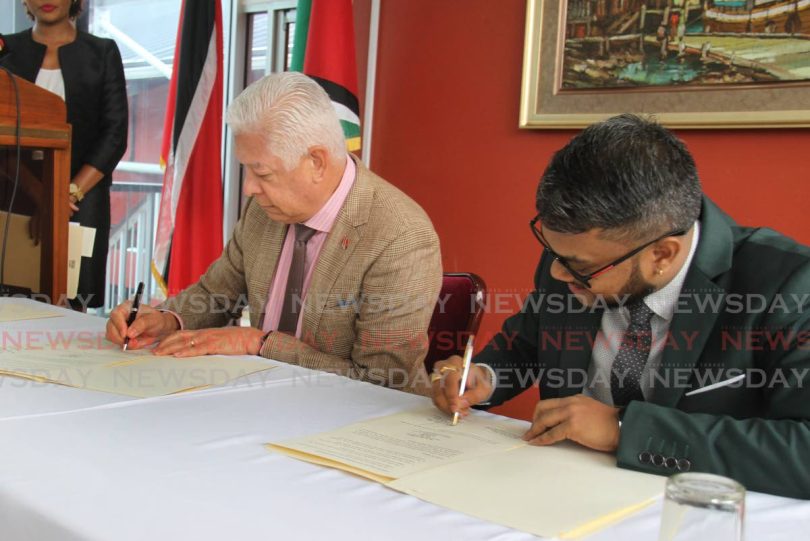 On Friday, the mayors of Port of Spain and Georgetown, Guyana, signed a memorandum of understanding (MOU) to establish a sister-city relationship.

The signing took place at City Hall and Georgetown was added to Port of Spain’s sorority of sister cities – the second in two weeks.

Other sister cities include: St Catherine in Ontario, Canada; Atlanta in Georgia, USA; Morne-A-L’eau in Guadeloupe; Kingston in Jamaica and Yeosu in South Korea.

On October 28, Port of Spain mayor Joel Martinez agreed to a similar MOU with Kumasi, Ghana.

Martinez said the MOU with Georgetown had been in the making since 2019. Both cities possess similar cultures and goals, he explained, and the MOU will benefit citizens of both cities in areas including: health, education, trade, tourism and culture.

Both mayors met on October 21 at a mayor’s forum in Argentina. Martinez said,”We joined four other Caribbean cities in signing an agreement to collaborate on a plan for elevating our population’s quality of life. “

He pledged Port of Spain’s continued support to the building of bilateral ties with Guyana.

Georgetown’s mayor, Pandit Ubraj Narine agreed that Port of Spain and Guyana shared many commonalities. He believed that the signing of the MOU could bring both cities closer in a working relationship.

“In Argentina, it was the mayor of Port of Spain’s idea to work together to form a community of Caribbean cities and we signed an agreement.”

Cities included in the Argentina agreement are: Georgetown, Port of Spain, San Fernando, Belize City and one in Dominica. Martinez had been appointed president of the group, Narine said.

“Ideas are good, yes, but action is necessary. Let this MOU that we sign today do not be an instrument of just words and talks, let us put it in action,” Narine said.

It was noted that the MOU does not create legally-binding rights or obligations and its terms cannot be adjudicated before local or international courts.

Narine thanked the Port of Spain corporation for the opportunity and acknowledged the council’s extended term of office.