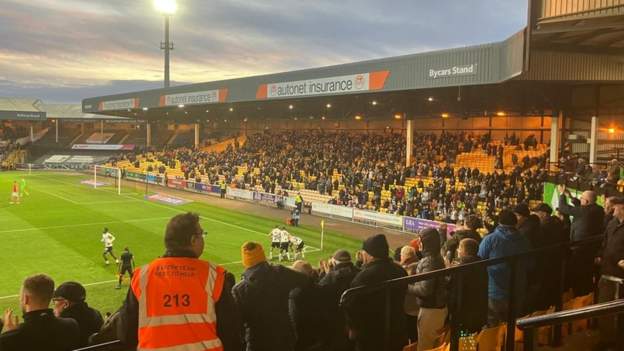 On-loan Blackburn Rovers frontman Danny Butterworth got the only goal of the game in Burslem as Port Vale saw off Charlton Athletic.

Butterworth’s superb 57th-minute solo effort was enough to lift Darrell Clarke’s Vale into 10th in League One, above the Addicks.

After slumping to their heaviest defeat of the season, 4-0 at Oxford last weekend, Vale started the day in 15th, four places behind, but only a point worse off than the Londoners – and boss Clarke made five changes looking for a response.

In a meeting of the EFL’s two Valiants, neither side managed a single shot on target in a nondescript first 45 minutes.

But Vale finally broke the deadlock 12 minutes into the second half with Butterworth’s third goal since arriving in the August window – all of which have come in Vale’s last three home games.

Collecting the ball from David Worrall down the inside-left channel, he arrowed his way on an angled run to the right side of the Addicks box penalty area, holding off two visiting defenders before carefully sliding a measured, low right-foot shot just inside debutant Australian keeper Ashley Maynard-Brewer’s right post.

Butterworth was then close to a second when his raking left-foot drive from 20 yards just cleared the bar, with Gillingham loan signing Maynard-Brewer beaten.

Late Addicks substitute Jack Payne almost rescued a point for Ben Garner’s side with a fierce right-foot shot on the stroke of 90 minutes, only for recalled keeper Jack Stevens to brilliantly tip it over the bar.

But the hosts hung on to send the majority of the 7,604 Vale Park crowd happy with only their seventh win in 19 attempts since being promoted from League Two last summer – and Charlton tumbling three places to 14th in the table.