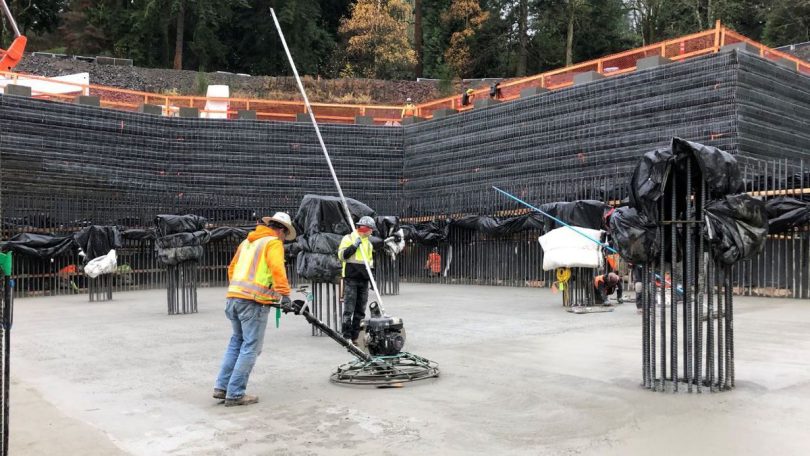 Engineers at the city of Portland have adopted a plan to use cement with a smaller carbon footprint.

Scientists estimate that up to 8% of global greenhouse gas emissions come from cement production. But lower-carbon cement mixes have now been developed. So, several departments at the city of Portland will start using it, including the water, transportation and environmental services bureaus.

“We did a pilot program where we tested the materials and found that they perform just as well as standard concrete,” said Inman.

The water bureau is not expecting low-carbon cement to be more expensive as it becomes more widely used.

“For the Water Bureau on the Washington Park Reservoirs project, by utilizing these different methods and as available with the market, there was no increase in the cost for this environmentally friendlier concrete,” Water Bureau officials told OPB in an email. “We expect this to be the case going forward as low embodied carbon concrete becomes the norm and is the predominant mix that is supplied.”

The city uses concrete for all kinds of projects, from sidewalks to reservoirs. The new cement is expected to reduce greenhouse gas emissions by up to 35% on some projects.

Building a new water reservoir with low-carbon cement, for example, would be the equivalent of taking 750 cars off the road for a year.

“Most of us don’t think much about the concrete beneath our feet. As the most widely used building material in the world, it has a significant environmental impact,” said Stacey Foreman, the city’s Sustainable Procurement Program Manager.

“Portland is a leader in establishing these thresholds and in our approach of bringing multiple stakeholders together to develop them.”