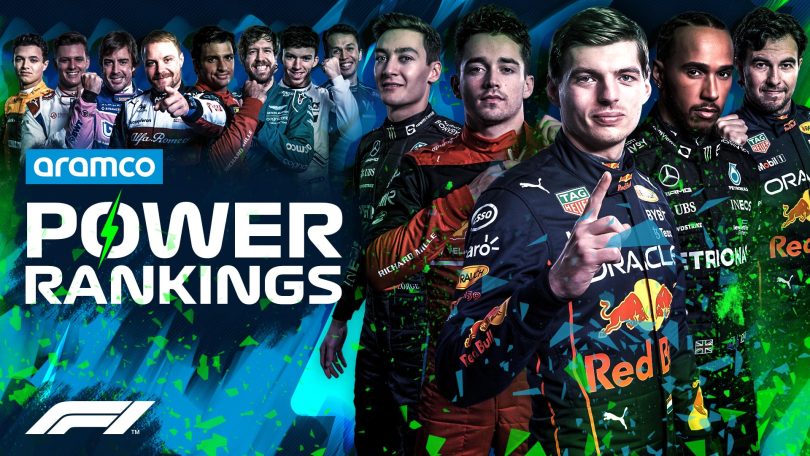 Max Verstappen pulled off a sensational victory from P10 on Sunday but who else impressed our judges at the Hungaroring? Here are the Power Rankings scores from the 2022 Hungarian Grand Prix.

After a power unit issue struck his Red Bull in qualifying, Verstappen ended up 10th on the grid for the Hungarian Grand Prix. Yet the reigning champion managed to work his way up the order with a clean start and pull off a pitch-perfect two-stop strategy by Red Bull to seal what was eventually a comfortable victory. The only blot on his copybook was a spin exiting the penultimate corner, but that barely shook the Dutchman, who completed a full 360 degree rotation and then carried on to the flag.

F1 NATION: The podcast crew chew over the Hungarian GP – plus the weekend’s big news on Vettel and Alonso

Lewis Hamilton, like Verstappen, lost out in Q3 – the Mercedes driver falling down the order because of a DRS issue that put him seventh on the grid. Yet the seven-time champion fought hard, went long in his first stint and even longer in the second stint, to finish the race on soft tyres and make it to second – ahead of team mate Russell and behind Verstappen – for his fifth consecutive podium finish.

George Russell took a sensational maiden pole position on Saturday, and led the most laps on Sunday (24) but ended up losing out to Leclerc in his second stint before being undercut by Verstappen. And as Hamilton finished his final stint on softs, Russell’s final medium-tyred stint saw him lose out to his team mate – but still retain the final podium spot.

Lando Norris might not have been thrilled by finishing in P7, well over a minute off the lead, but the McLaren driver was the last driver on the lead lap and comfortably ahead of the Alpine of Alonso. Add to that his P4 qualification lap, and it’s clear to see why Norris took such a solid Power Rankings score.

Fernando Alonso was out-qualified by team mate Esteban Ocon and found himself stuck behind his team mate for much of the race, but ended up passing the Frenchman on Lap 41. He finished eighth, three seconds ahead of ninth-place Ocon, thanks to a slightly superior show of race pace – both Alpine drivers having pulled off a one-stop strategy.

ANALYSIS: Why Alonso accepted Aston Martin’s advances and signed a shock deal – and why it could be a perfect match

Carlos Sainz managed second on the grid as Russell pipped him by 0.044s, and the Spaniard ended up losing out on race day because of slow pit stops. However, he managed to go longer in his second stint and finish the race on softs, which gave him the pace over team mate Charles Leclerc and Red Bull’s Sergio Perez. Sainz couldn’t keep Hamilton at bay though, and finished behind the other Mercedes of Russell as the late Virtual Safety Car curtailed his podium chase.

Leclerc was out-qualified by Sainz but still managed P3 on the grid and the Monegsaque eventually undid Russell’s staunch defence for the lead. However, the decision to pit Leclerc for hard tyres on Lap 39 saw him lose out twice to Verstappen, before he stopped for tyres a third time on Lap 54, this time for softs. That late soft-tyred stint saw Leclerc finish sixth, a few tenths behind Perez, but it seemed like the Austrian Grand Prix winner was hampered by the team’s strategy on the day.

READ MORE: ‘It was a disaster’ – Leclerc ‘very disappointed’ with P6 finish in Budapest as he singles out what cost him victory chance

Esteban Ocon out-qualified Alpine team mate Alonso for P5 on the grid and the Frenchman held up his team mate for much of the race, but ultimately had to let him by as Alonso’s race pace proved better than Ocon’s, who finished ninth – holding off Vettel by two-tenths of a second – to Alonso’s eighth.

As mentioned above, Sebastian Vettel couldn’t quite snatch P9 off Ocon and may well have done so if the VSC wasn’t deployed late on. But P10 was a consolation as the Aston Martin driver’s Saturday was far from ideal: a crash in FP3 was followed by him qualifying a lowly P18 on the grid. But a soft-medium-medium strategy combined with strong race pace saw Vettel take the final point at the expense of team mate Stroll, on the weekend when the German announced his retirement from F1 at the end of the season.

READ MORE: Vettel pinpoints Aston Martin’s weakness after racing into the points from P18 in Hungary

Pierre Gasly qualified a disappointing 19th due to track limits costing him in Q1 then started from the pit lane after a power unit change undertaken within Parc Ferme conditions. The AlphaTauri driver pulled off overtakes on a number of midfield rivals and ended up finishing an impressive P12 from the very back – promoted a place by Valtteri Bottas’s late stoppage.

Bottas just missed out on the top 10 this week, the Finnish driver having stopped out on track from P12 just five laps from the end.