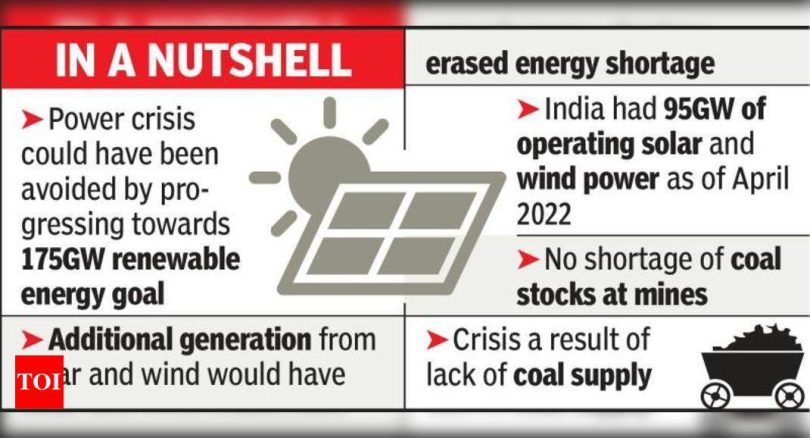 Nagpur: India could have averted the power crisis last month if progress towards the 175 GW renewable energy goal had been on track, reveals a new analysis by think tank Climate Risk Horizons.
In April this year, the country witnessed acute power shortage due to unavailability of coal, with more than 100 million units (MU) of energy shortage on 8 days during the month.
“This forced discoms in several states to enforce load-shedding to ration power. The power shortage was due to problems with the evacuation and stockpiling of coal at thermal power plants, combined with a spike in the price of imported coal for coastal plants and high prices on the power exchange,” the analysis stated.
It further highlighted that March this year was also the hottest in 122 years, causing increased power demand for cooling, with impacts on coal stocks at power plants.
As per the analysis, the crisis could have been avoided of the country was on track to achieve clean energy target. In 2016, India set an ambitious goal of reaching 175 GW of renewable energy by 2022. As of April 2022, it had 95 GW of operating solar and wind power, implying a target slippage of about 51 GW.
“Our analysis shows that the additional generation from solar and wind would have erased the energy shortage and would have allowed power plants to conserve their dwindling coal stocks for evening peak periods when solar generation dips. The additional renewable energy generation would have translated into a saving of at least 4.4 million tonnes of coal,” said Abhishek Raj, analyst with Climate Risk Horizons.
Analysts also stated that the power shortage has led to calls to further augment India’s coal power and mining capacity, despite the fact that there was no shortage of coal stocks at mines, nor was there a shortage of installed coal power generation capacity. “Rather, the crisis was a result of lack of coal supply, due to logistical and cash flow reasons,” the analysis stated.
“Two things are true– without the massive growth in clean energy since 2016, the power crisis in April would have been much, much worse. At the same time, if we had been on track for 175 GW by the end of the year, there would have been no power crisis at all. Logistical constraints in the coal supply chain are a permanent feature and will certainly recur, as will heat waves; the best safeguard is to diversify our electricity mix. This reinforces the need for the center and state governments to rapidly scale up their RE deployment and reduce dependence on coal,” said Ashish Fernandes, CEO of Climate Risk Horizons.
IN A NUTSHELL
– Power crisis could have been avoided by progressing towards175 GW renewable energy goal
– India had had 95 GW of operating solar and wind power as of April 2022
– Additional generation from solar and wind would have erased energy shortage
– No shortage of coal stocks at mines
– Crisis a result of lack of coal supply