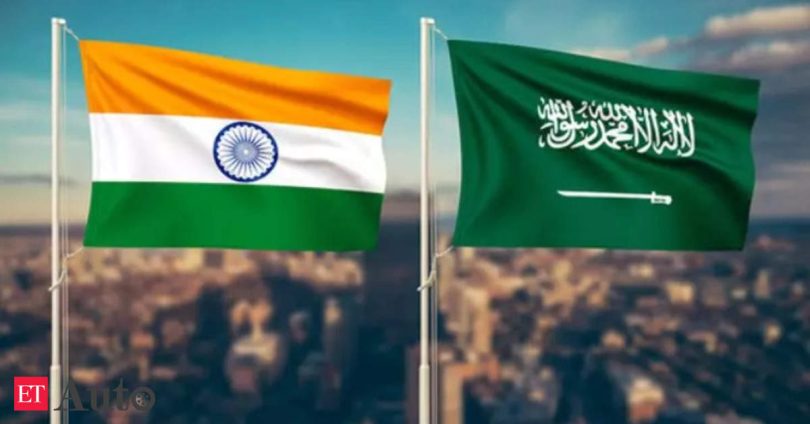 New Delhi: Saudi Arabia under its vision 2030 is seeking greater international cooperation for development; India is one of the natural choices for it for both a long historical and cultural linkage as well as India’s emergence as an “engine of economic growth” for the post-Covid economic recovery. The partnership between the two countries is already at a remarkable pitch, today it is looking up to a new height for a win- win engagement.

The complementarities between the Saudi and Indian economics are unmistakable. Already the bilateral trade between the two countries has reached USD 40 billion and investment is ticking up. Saudi Arabia is the fourth largest energy supplier to India and a vast skilled and semi skilled labour force from India is contributing to Saudi Arabia’s growth and modernization saga.

The current emphasis on potential win-win areas of cooperation is based on both the countries’ unique strengths and capabilities. On one hand, India is a leading emerging economy with a vast market as well as a rising technology and supply chain hub. Added to this is that it has a stable government accredited for good governance, rule of the law and fast paced economic reforms and technological development. On the other hand, Saudi Arabia is flush with huge investible funds and charged by a genuine ambition for development and modernization.

Saudi Arabia created in 1971, “Public Investment Fund” (PIF) a sovereign wealth fund, having an estimated asset worth USD 620 billion to develop modern infrastructure in the country and diversify its industrial base to non-oil sectors. In July 2014, Saudi Council of Ministers granted the PIF authority to fund new companies inside and outside the Kingdom, either independently or in cooperation with the public and private sector without Council’s permission.

There is a huge possibility for PIF to finance projects of strategic significance to the national economy of the Kingdom. In fact, the Saudi Arabian regime is for quite some time, trying to deploy these funds profitably and productively, apart from investing these funds to expand its global partnership and influence.

The PIF could be invested in joint ventures as well as profitable economic ventures in India. The PIF has little channelization of investment into industrial development and enhancing global cooperation. Saudi Arabia could explore cooperation with India to develop the non-oil sectors such as textiles, leather, gems and jewellery apart from engineering and chemical products in which India has expertise and comparative advantage.

PIF has already taken stakes in companies like Posco Engineering & Construction Co., video game companies like Capcom and Nexon and Qiddiya which is involved in developing luxury beach resorts. Saudi Arabia could explore the opportunities to invest in India’s sunrise sectors including electronics, tourism and pharmaceutical sectors. It may also go for joint development of IT and software service in the Kingdom.

India has been hailed as a bright spot by analysts and economists with strong macroeconomic fundamentals making it a good pitch for investments. Recently the International Monetary Fund (IMF) MD Kristalina Georgieva described India as a ‘bright spot’ on an otherwise dark horizon, even if it pared the country’s growth forecast for FY 2023 to 6.8 pr cent from 7.5 per cent estimated earlier. In spite of rising interest rates, high inflation and a stalling global economy, the IMF underlined India’s economic resilience.

The business environment is changing fast in India. Morgan Stanley forecast that India will be the 3rd largest economy by 2027, with its GDP more than doubling from the current $3.4 trillion to $8.5 trillion over the next 10 years. The size and scale of the Indian economy will be on the radars of foreign investors over the next decade. Given a long history of cooperation, Saudi Arabia could easily find India to be an easy investment destination.

Another opportunity is that India is poised to rise up in the global value and supply chain. It has grown from being a low-cost off-shoring destination to a true technology and business partner for every business in the world. Global businesses are no longer coming to India for its low-cost labour but to access its highly skilled workforce, stated Rishad Premji, Executive Chairman of IT services provider Wipro recently.

According to him, “This confidence is driven by two things – rapid pace of digitalization globally and shift in the mindset of stakeholders”. The shift in mindset is because clients no longer see cost or quality but want access to the best talent to build relevant digital business models.

Innovation and skilled manpower is the core of Indian human resources. India’s innovation and manufacturing success can be seen from the fact that about 66 per cent of the Foreign Direct Investment (FDI) in electronics and manufacturing has come in over the past 3 years. In the next 6 – 7 years, India will be a $1 trillion digital economy.

Opportunities in the technology ecosystem have moved from services to innovation and startups, semiconductor manufacturing, microelectronics design, Web 3.0 and artificial intelligence. India’s likely launch of 5G in the near future would add up to its innovation capacity, both men and material.

India is one of the fastest growing hot spots for Web 3, with some 500 companies working on it, including four that have already become unicorns with billion dollar plus valuations. Web 3 is an idea for a new iteration of the World Wide Web (www) which incorporates concepts such as de-centralization, block chain technologies and token based economies.

Given the long coast line and there reliable connectivity with industrial hubs and SEZs, the existence of profitable avenues in India could not be overemphasized. There lies great scope manufacturing in India. It has around 417 approved Special Economic Zones (SES) stretching throughout its vast territory. These SEZs are provided with all the necessary connectivity as well infrastructure so that diverse local talent and resources can be utilized. Riyadh can use these SEZs for industrial collaboration to manufacture goods to be exported to the Middle East region as well as the North African region.

Defence and space are the other possible areas of cooperation between the two countries. It stems from the fact that the Indian Space Research Organization, popularly called ISRO, had recently successfully launched commercially its heaviest rocket putting 36 satellites of a UK based communication company. India’s R&D in defence production is now moving to become world class and New Delhi is targeting to realize an export goal of USD 5 billion shortly, Saudi Arabia could leverage it out for getting high quality defence products at competitive rates.

India is on track to attract $ 100 billion FDI in the current fiscal year owing to economic reforms and ease of doing businesses. To attract foreign investments, the Indian government has put in place a liberal and transparent policy wherein most sectors are open to FDI under automatic route. The reform measures included liberalization of guidelines and regulations in order to reduce unnecessary compliance burden, bring down cost and enhance the ease of doing business in India.

These opportunities can be explored by Saudi Arabia in realizing its own goals of Vision new 2030. Saudi Arabia could be the next development partner of India in this shared journey of modernization and development through investment and joint ventures.

India’s presidency of the G20 would focus on global prosperity and peace. This would provide a good opportunity for Saudi Arabia in optimization of commonly shared goals of development. As a major shipping link for India, the Indian Ocean remains the common factor for Saudi Arabia also. It is pivotal in terms of both security and commerce and their cooperation could be a win-win for both the countries.