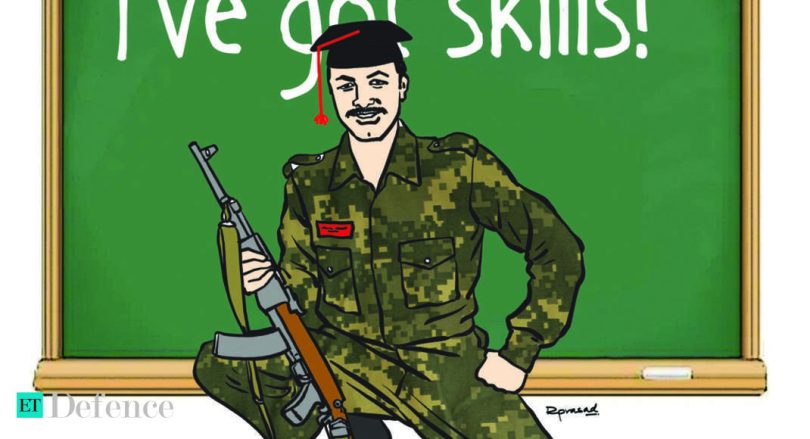 All the 19 institutions of the Tri-Services of India – Indian Navy, Indian Air Force and Indian Army – and the Army’s 17 directorates have finally been fully affiliated to the Centre’s skilling and academic credit ecosystem under project ‘Punah Sthapan’, ET has learnt.

This gives the 19 institutions and 17 directorates the status of an ‘awarding body’ – allowing them to give due credits for the skills a soldier acquires and the training/courses she/he undertakes as a defence personnel. The same was recorded at the January 5, 2023, meeting of the National Skills Qualification Committee.

The move is bound to work to the advantage of defence personnel, including the ‘Agniveers’, the first batch of which started training late last year.

The alignment under project ‘Punah Sthapan’ with the larger skilling framework will enable “skill credit assignment, accumulation, storage and redemption to the advantage of the defence personnel once they hang their boots”, officials said.

This “creditising” of the in-service skills – up to 50% of a course – will enable the soldier to acquire a class 12 certificate or an undergraduate certificate/diploma/degree.

What it essentially means is that of the 120 credits required for a bachelor’s degree, 60 will be awarded and credited by the defence training institution/directorate to a defence personnel’s academic account by virtue of her/his in-service skills/training/courses. This, in turn, will help defence personnel get employment after leaving the armed forces.

“Approximately 125 skill sets of the various arms of the Indian armed forces have been already mapped to the existing job roles/qualifications which are aligned to the industry needs,” an official in the know confirmed. “This is an ongoing process and shall continue to be done with the alignment of each learning outcome of these personnel to the Industry and the National Skills Qualification Framework (NSQF).”

The armed forces personnel become highly skilled during their service tenure in sectors like logistics, engineering, telecom, management, security (armed and unarmed), manufacturing and services, IT/ITes, aerospace and aviation among many others.

“The skills gained in these sectors will enable them to operate in the job roles such as technicians, supervisors, management executives, security officers, associates in areas such as logistics and services economy, etc.,” the official said.

“They will now be able to creditise the skills being imparted to their soldiers which they gain through their regular training process, including academic, vocational and experiential learning, and align the courses/training being imparted by all these institutions with the NSQF,” it was recorded during the January 5 meeting of the NSQC.

Project “Punah Sthapan” was undertaken by the Army to align their qualifications and undertake training in NSQF-aligned and approved qualifications. They took upon the matter with the Ministry of Skill Development & Entrepreneurship and the NCVET in March 2022, seeking recognition as an awarding body.