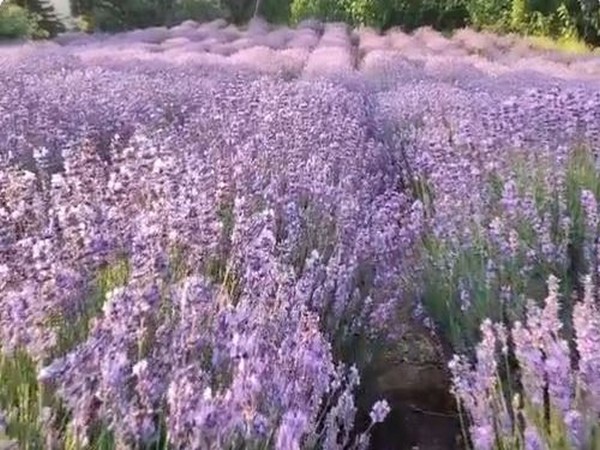 Srinagar (Jammu and Kashmir) [India], September 4 (ANI): The Lavender Revolution has brought laurels to the farmers in Jammu and Kashmir while covering the whole region purple.
For centuries the colour lavender has stood for serenity and calm. Its purple colour is associated with the crown chakra and its properties regulate bodily functions and enhance one’s spiritual practice.
An idea for the Aroma Mission was conceived for Lavender plant in Jammu and Kashmir by the Union Ministry of Science and Technology through the Council of Scientific and Industrial Research (CSIR). It is a joint effort by the CSIR and the Indian Institute of Integrative Medicine (IIIM), Jammu.
The idea aimed at becoming ‘Atmanirbhar’ and growing those herbs in India that it used to import earlier.
As per the scheme, free lavender saplings have been distributed to first-time farmers. Along with that, training sessions are also being conducted at the Krishi Vigyan Kendras (KVK) of the concerned districts.
The Sher-e-Kashmir University of Agriculture Sciences and Technology (SKUAST) and Krishi Vigyan Kendras have lent a huge helping hand in helping farmers learn the best techniques and scientific methods to grow the best quality lavender.
Lavender is grown in cold temperatures and moderate summers. It has a gestation period of two years before the plantation can rain money.

This is why farmers and ‘Agri-preneurs’ are switching to lavender from traditional crops which aren’t as financially rewarding. It is grown in all twenty districts of the UT as of today and has completely transformed the socio-economic climate.
Lavender has been a ray of hope for farmers with small land holdings. Compared to any other normal crop, such as maize, it could hardly fetch Rs 2500 per kanal (8 kanals = 1 acre). On the other hand, lavender can easily earn up to Rs 15,000 per kanal every year.
Presently more than a thousand farming families are employed on more than 200 acres of lavender fields. And each farmer takes also keeps at least 5 more people, thereby employing 6,000 families in this mission.
Union Minister of Science and Technology Dr Jitendra Singh inaugurated India’s first ‘Lavender Festival’ at Bhaderwah, last month. He also inaugurated six distillation units for the extraction of lavender oil. Bhadarwah produced more than 800 litres of lavender oil between 2018 to 2020 which is worth Rs 80 lakh.
Lavender gardens are also becoming a tourist attraction as the tourist places have become busier. Some resorts are also hosting picnics in private fields for those who wish for a quieter, luxurious experience.
The youth in particular has heavily invested themselves in growing and fulfilling the lavender demands of the perfume industry in Europe.
Lavender is shifting the paradigm in Jammu and Kashmir. Youth are coming back to the valley to work in their family fields. It is changing the narrative of farming because finally there is a crop that is truly financially lucrative. (ANI)