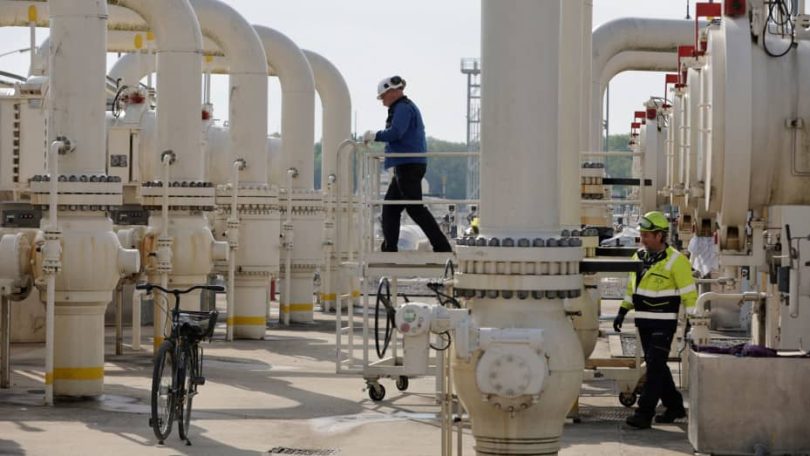 Europe’s descent into an economic contraction looks to have been confirmed with Russia squeezing natural gas supplies to the region and heavy industry facing tough rationing in the coming months.

Just days after Europeans breathed a sigh of relief as Russian gas giant Gazprom announced it would resume supplies through the Nord Stream 1 pipeline, it then announced Monday that flows would be reduced yet again.

The announcement, with Gazprom saying it would be for maintenance of a turbine along the pipeline, was greeted with incredulity and condemnation in Europe.

Ukraine’s president, Volodymyr Zelenskyy, said the move — which will see flows to Germany fall to 20% of its capacity from an already low level of 40% — was tantamount to a “gas war” with Europe. Germany’s economy minister, Robert Habeck, said the excuse that maintenance was the reason for the supply cut was a “farce.”

It puts Europe in a tricky situation as it contends with rampant inflation, the war in Ukraine and an already troubled supply chain following the Covid-19 pandemic.

Germany, the region’s largest economy and traditional growth driver, has a particular reason to worry. It’s largely reliant on Russian gas and is sliding toward a recession. The government is particularly concerned about how it will keep the lights on over the winter: Habeck said Monday evening that “we have a serious situation. It is time for everyone to understand that,” during an interview with broadcaster ARD.

Habeck also said that Germany must reduce its gas consumption, noting “we’re working on that.” He said that in a scenario of low supplies, gas for industries will be reduced before private residences or critical infrastructure such as hospitals.

“Of course it’s a big concern, which I also share, that this can happen. Then certain production chains in Germany or Europe would simply no longer be manufactured. We have to avoid that with all the strength we have,” Habeck said.

With Russia under a raft of international sanctions in response to its war on Ukraine, gas is one weapon it can use against Europe.

The region has previously received around 45% of its annual supplies from Russia and while it desperately tries to seek alternatives, such as U.S. liquefied natural gas, it cannot replace its Russian hydrocarbons fast enough.

Unless the situation dramatically changes, analysts are predicting a difficult winter ahead for the Continent.

“Our July forecast already incorporates mild second-quarter contractions in real GDP in the UK, Italy, Spain, and the Netherlands. With inflation surprising on the upside, the central banks are stepping up the pace of monetary policy tightening. While a rebound in tourism and consumer services might give the region a slight lift in the summer quarter, another setback is likely in the fourth quarter given unreliable energy supplies,” it added.

Exceptionally high natural gas and electricity prices will damage industrial competitiveness in Germany and other manufacturing centers. S&P warned the destructive Russia-Ukraine war will likely drag on through 2022, deflating consumer and business confidence across Europe.

EU governments agreed Tuesday to ration natural gas in the coming winter in a bid to insulate themselves from further supply cuts by Russia with the bloc’s energy ministers approving a draft European law aimed at lowering demand for gas by 15% through the fall and into next spring.

Whether the gas savings can be achieved remains to be seen and there has been dissent among EU members about the rationing of gas use.

“Cutting consumption can only do so much. Fundamentally, there is huge demand for natural gas and especially liquid natural gas (LNG) in Europe. Rationing, which will especially impact energy intensive industries like car makers, chemical companies and cryptocurrency mining, can’t be ruled out,” Simon Tucker, global head of energy, utilities and resources at Infosys Consulting, said in emailed comments Tuesday.

“EU countries and the UK must do all they can to replenish gas stores before the cold kicks in – this means looking at every way possible to reduce energy use and improve supply. We’re already seeing a large increase in shipments of LNG from the Middle East and North America. But countries need to accelerate the modernisation of their own infrastructure. Mass deployment of low-carbon, domestic energy alternatives like mini nuclear reactors and community renewables is not just a ‘nice to have’, it’s an imperative if we are to come out of this crisis stronger.”

The possibility of a recession in Europe now seems “clear-cut,” Citi economists and strategists said in a note Tuesday, with Russia’s decision to cut gas flows again likely to have “the consequence of pushing Europe into a deeper recession.”

The strategists believed that with the pipeline flowing at 40% capacity Germany could make it through the winter even if some light rationing was needed. “At 20% you would likely need some notable rationing unless they cut gas exports which would be a very delicate thing to do politically,” the Deutsche Bank analysts said.

In the meantime, the potential 15% reduction that all EU member states have just agreed upon could be hard to enforce in reality. “Expect lots of carve-outs and compromises to appear if a plan that can progress is agreed,” they said.

“As plans for energy rationing for winter get agreed upon, we expect that tighter financial conditions in Europe will induce a much worse reaction in the real economy, given the stance in savings, household leverage and corporate balance sheets. Winter is knocking on Europe’s door,” Citi concluded.

There is, of course, the chance that Russia could again turn up the taps on its gas flows to Europe once the supposed maintenance of this turbine on the Nord Stream 1 pipeline is completed.

“It’s a bit confusing as to whether this will be a short restriction of supply while the repaired turbine makes its way back online or whether the paperwork will never quite be resolved, and we live with only 20% supplies for a considerable time,” Deutsche Bank analysts led by Jim Reid said in a note Tuesday, adding that Russia was likely looking for clearer guarantees on future sanctions exemptions for maintenance of NS1 and related issues.

“This will likely be hard to achieve and the Russians will know this. So it appears like Russian politics will be in control here for now,” they said.