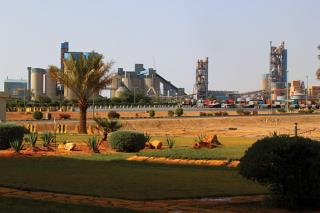 This week Qassim Cement Co (QCC) announced a Memorandum of Understanding (MoU) with Hail Cement Co (HCC) for the proposed acquisition of HCC. ICR explores the growth strategy of QCC and the potential for further mergers and acquisitions in the Saudi cement market.

Saudi Arabia currently has one of the strongest economies in the world. The kingdom’s GDP growth is expected to reach 7.5 per cent this year – the highest in a decade, according to credit rating agency S&P. Moreover, the country’s state budget surplus is forecast to be about 6.3 per cent in 2022.

Domestic cement demand
With robust economic growth in the country, cement companies are expected to benefit from the large public investment projects funded by the Public Investment Fund and National Development Fund. These include construction activity for tourism projects, such as The Red Sea Development Co, and Amaala luxury resort, the new Neom city and the US$2.8bn Qiddiya water theme park project.

Currently in a growth phase, QCC announced in December 2021 that it planned to construct a 10,000tpd  production line at its Buraydah cement plant to replace some of its existing 4.4Mta cement capacity. The new line’s construction is expected to start this year. Chengu Design & Research Institute of Building Materials Industry (CDI), part of the Sinoma Group, China, entered into a preliminary agreement in December 2021 to supply QCC with a new 300tph capacity mill for the cement production unit at a cost of US$40.53m. From the start of installation, the mill is expected to take 15 months to become operational. Additionally, in January 2022 the cement factory announced that it will see the construction of a 30MW solar power plant.

Meanwhile, the Saudi Arabian cement market remains fairly fragmented with 20 cement producers and an overall cement capacity of just over 80Mta. There has not been any recent acquisition activity, but QCC may be just the first of those looking at indirect growth as well as building their own cement production through expansion projects. The company has positioned itself to become a bigger regional player in the northeastern part of the kingdom. By acquiring a major stake in HCC, which operates an integrated cement plant at Al-Bid, located 340km from QCC’s Buraydah plant, QCC will add 1.8Mta cement capacity.

Positive growth signals
While cement prices in Saudi Arabia are forecast to rise this year on the back of higher energy costs, these price rises also underpin the investment in many infrastructure and construction works that are ultimately to benefit the domestic cement sector and fuel its growth. Export markets have also been holding up with HCC and QCC licensed to export cement and clinker. HCC recorded its highest YoY sales increase of 170.8 per cent in May 2022, reports AlJazira Capital.

Furthermore, the kingdom has joined more than 100 countries in having committed to achieve net-zero CO2 emissions by 2060, which should see cement companies in the region start to divert more investment to decarbonisation.

QCC may be ahead of the curve in driving its growth ambitions compared to other single plant companies in the sector. There are still several single-plant cement companies with cement capacities under 3Mta, such as Al Gharbiah Cement and Al Safwa Cement, and these could be considered more vulnerable to takeovers than larger players. However, Al Safwa Cement is already adding 0.66Mta capacity to its Farasan plant. The remaining smaller cement producers could similarly aim to expand by enlarging their facilities’ capacity.