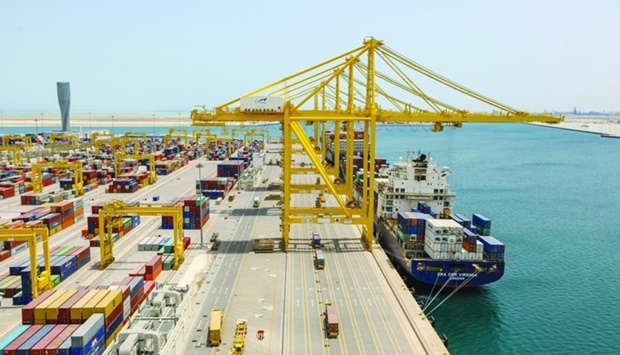 Qatar’s maritime sector displayed robust performance this September as more ships called on Hamad, Doha and Al Ruwais ports and there was a growth in general cargo and container handling compared to August 2022, according to the official data.
The number of ships calling on Qatar’s three ports stood at 276 in September 2022, which saw 3.37% increase against August 2022. However, it was 7.07% lower on an annualised basis.
As many as 2,176 ships had called on three ports during the first six nine months of this year.
“The maritime sector of Qatar has undergone a significant transformation in recent years,” Mwani Qatar said in a tweet.
Hamad Port – whose strategic geographical location offers opportunities to create cargo movement towards the upper Gulf, supporting countries such as Kuwait and Iraq and south towards Oman – saw as many as 138 vessels call on the port in the review period.
The general cargo handled through the three ports was 132,270 tonnes in September 2022, which showed a stupendous 31.13% and 15.63% jump month-on-month and year-on-year respectively in the review period, according to figures released by Mwani Qatar.
Hamad Port – whose multi-use terminal is designed to serve the supply chains for the RORO (vehicles), grains and livestock – handled 63,500 freight tonnes of bulk and 58,304 freight tonnes of breakbulk in September this year.
On a cumulative basis, the general cargo movement through the three ports totalled 1.15mn tonnes during January-September this year.
The three ports handled 6,048 RORO in September 2022, which registered a 26.68% decline on a monthly basis but zoomed 38.81% surge year-on-year. Hamad Port alone handled 6,043 units in August this year.
The three ports together handled as many as 59,539 vehicles during January-September 2022.
The container handling through three ports stood at 123,006 TEUs (twenty-foot equivalent units), which showed a marginal 0.93% increase on a monthly basis but declined 4.47% year-on-year in September 2022.
Hamad Port, which is the largest eco-friendly project in the region and internationally recognised as one of the largest green ports in the world, saw 119,890 TEUs of containers handled this September.
The container handling through the three ports stood at 1.06mn TEUs during January-September this year.
The container terminals have been designed to address the increasing trade volume, enhancing ease of doing business as well as supporting the achievement of economic diversification, which is one of the most important goals of the Qatar National Vision 2030.
The building materials traffic through the three ports stood at 27,364 tonnes in September this year, which plummeted 23.59% and 34.41% month-on-month and year-on-year respectively.
A total of 352,560 tonnes of building materials had been handled by these ports in the first nine months of 2022.
The three ports had handled 6,499 livestock in September 2022, which showed 6.11% and 79.89% decrease on monthly and yearly basis respectively. The ports had handled a total of 127,316 heads during January-September this year.
Doha Port is boosting efforts to transform the country into an attractive regional tourist destination serving global cruise ships as well as providing the facilities needed for the economic diversification being pursued by the Qatar National Vision 2030.
“Qatar’s maritime sector is expected to witness another year of strong growth in light of the efforts taken by the authorities concerned to boost goods traffic at the ports, with expectations of supply chains improving during the next few periods,” Mwani Qatar had said in its latest annual report.