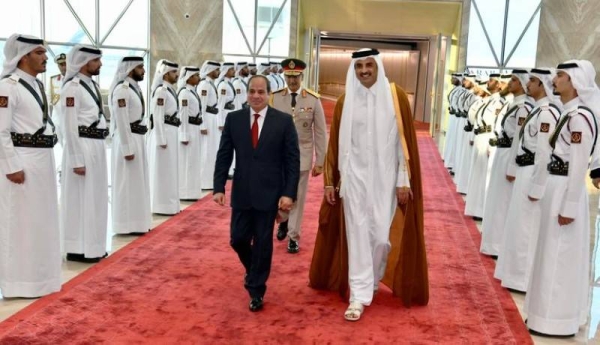 He wished that the visit of the Egyptian leader to Qatar would contribute to enhancing the cooperation between Qatar and Egypt to serve the interest of both nations. On his part, Al-Sisi expressed his deepest thanks and gratitude to Sheikh Tamim for his warm hospitality, hoping that that the bilateral ties between their countries would be bolstered at all levels, QNA added.

The leaders tackled means to develop their relations in many domains, including investments, transportation, social affairs, as well as discussing the latest issues of common interest in the regional and international arenas, it added.

Meanwhile, the official spokesperson of the Egyptian Presidency Bassam Radhi said today in remarks to Middle East News agency MENA that President Al-Sisi during his meeting with Sheikh Tamim stressed on the importance of deepening the bilateral ties between both nations in all political, security, economic and commercial fields.

Sheikh Tamim has welcomed the historical visit of President Al-Sisi to Qatar, considered the first official visit to the country, which came to crown the distinguished developments in the relations between Qatar and Egypt, Radhi added.

He praised the distinguished relations between both nations, endorsing the Egyptian efforts that supporting the Gulf and Arab issues, which greatly contributes to the prosperity and stability of the region, he said.

Sheikh Tamim also stressed on Qatar’s keenness to boost cooperation with Egypt in all fields in the upcoming period by increasing the Qatari investments in Egypt, and benefit from the available investments opportunities, he said.

The two leaders exchanged visions regarding the latest developments in the Arab area and region of common interest, as Qatar and Egypt agreed to reach a sustainable political settlement for the region’s conflicts, Bassam Radhi added.

Both sides also signed a memorandum of understanding on cooperation in the field of ports, he added. — Agencies