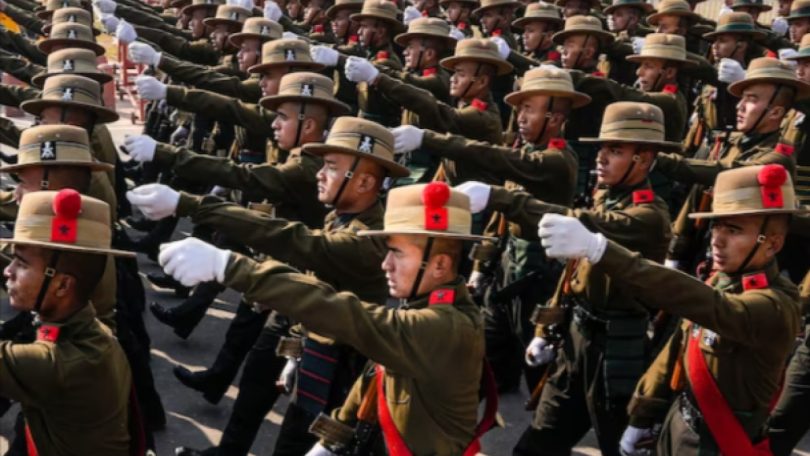 By Press Trust of India: The 74th Republic Day celebrations will take place on the revamped Central Vista avenue, and the government has put 32,000 tickets on sale online for the masses, defence ministry officials said on Wednesday.

For the first time, all official invites for the ceremonial event will be sent online, they said. Egypt’s President Abdel Fattah al-Sisi will be the chief guest at the Republic Day celebrations on January 26, the Ministry of External Affairs (MEA) had said in November.

For the Republic Day celebrations, a 120-member military contingent from Egypt will also be taking part in the celebrations, officials said.

“This is the first time that the President of the Arab Republic of Egypt will be the Chief Guest at our Republic Day,” the MEA had said in a statement. This will be the first Republic Day celebrations hosted at the ceremonial boulevard after Rajpath was renamed to ‘Kartavya Path’ last year.

A dress rehearsal for the parade was held on Wednesday. Besides, 23 tableaux — 17 from states and Union territories, and six from various ministries and departments, — depicting the nation’s rich cultural heritage, economic and social progress and strong internal and external security will roll down the Kartavya Path during the ceremonial parade, the Ministry of Defence said in a statement.

A presentation on the celebrations to be held from January 23-31, as part of the Republic Day celebrations, was made on Wednesday after a press briefing by Defence Secretary Giridhar Aramane at the South Block here.

The Republic Day celebrations will be held in a spirit of greater ‘janbhagdari’ (public participation) and workers of Central Vista project and their family members, maintenance workers of Kartavya Path, vegetable vendors, milk booth workers, grocery shopkeepers and rickshaw-pullers will be “special invitees”, the officials shared during the presentation, and these special invitees will be prominently seated at the Kartavya Path.

“Before COVID-19, over a lakh people used to attend the Republic Day celebrations, which was drastically cut in the immediate years following the outbreak of the pandemic in India (in early 2020).

This year about 42,000 people are expected to attend it and 32,000 tickets for seats at the event have been put online, and the response from people have been good,” the senior official said.

New bleachers and retractable seats have been put up in the lawns of the Kartavya Path, and with more space between two seats, he said.

Also, 32 officers and 166 cadets from 19 countries are expected to participate in the 74th Republic Day celebrations, according to details shared in the presentation.

The celebrations will begin with a grand event on the birth anniversary of Netaji Subhas Chandra Bose on January 23 and go on till Mahatma Gandhi’s death anniversary (January 30), the defence secretary said.

Aramane told reporters that the celebrations this year have been planned reflecting Prime Minister Narendra Modi’s vision of ‘janbhagidari’.

The celebrations will also be a tribute to INA veterans, people and tribal communities who participated in freedom movement. Many new events are being organised as part of the Republic Day celebrations this year.

These include a military tattoo and tribal dance festival; Veer Gatha 2.0; second edition of Vande Bharatam dance competition; performances of military and coast guard bands at the National War Memorial; an all-India school band competition at NWM; a drone show and projection mapping during the Beating the Retreat ceremony, the ministry said.

OVER 1,200 PERFORMERS TO PARTICIPATE

Over 1,200 performers are fine tuning their art forms each day in rehearsals with their unique and colorful costumes, headdresses, musical instruments and rhythmic dance beats.

Twenty tribal dance troupes from all across the country will perform during the military tattoo event. Approximately 60,000 spectators are expected to attend the event, it said.

The grand finale will showcase a performance by noted singer Kailash Kher. The entry for the event will be free and tickets can be booked online through a portal. Veer Gatha, one of the unique projects launched as a part of ‘Azadi Ka Amrit Mahotsav’ last year, was organised to inspire and spread awareness among children about the gallant deeds and sacrifices of the Armed Forces.

This year too, the Tri-Services organised virtual and face-to-face interaction of school children with Gallantry Award winners and the students (from 3rd to 12th standard) submitted their entries in the form of poem, essay, painting, multimedia presentation etc.

Reflecting the ‘janbhagidari’ theme, ‘Bharat Parv’ will be organised at Gyan Path in front of Red Fort from January 26-31 by the Ministry of Tourism. It will showcase Republic Day tableaux, performances by military bands, cultural performances, pan-India food courts and crafts bazaar.

“This year, physical invitation cards for guests and spectators have been replaced by e-invitations. For this purpose, a dedicated portal amantran.mod.gov.in has been launched. Sale of tickets, admit cards, invitation cards and car parking labels are being issued online through this portal. This will ensure the whole process to be more secure and paperless and enable people from all parts of the country to attend this national event,” the statement said.

At the Beating the Retreat ceremony on January 29, the “biggest drone show in India, comprising 3,500 indigenous drones, will light up the evening sky over the Raisina Hill, weaving myriad forms of national figures and events through smooth synchronisation, officials said.

Also, for the first time, a 3D anamorphic projection will be organised during the Beating Retreat Ceremony on the facades of the North Block and the South Block, the ministry said.