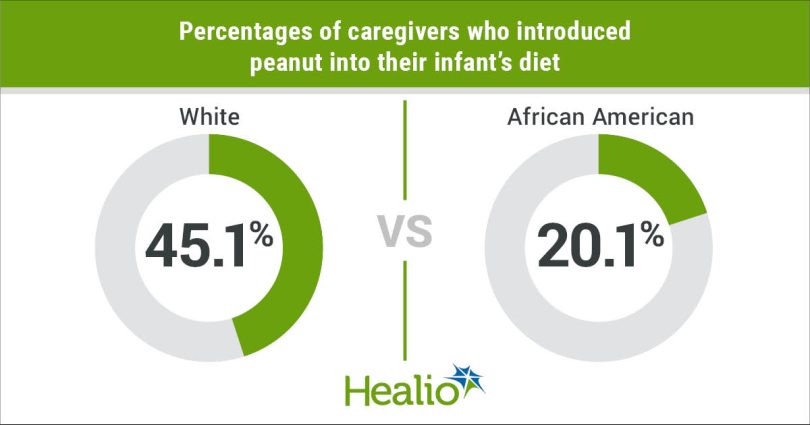 
Disclosures:
Lieberman reports investigator roles with Aimmune Therapeutics, DBV, Novartis and Regeneron; data safety monitoring board roles with AbbVie and Siolta; advisory board roles with ALK, Aquestive Therapeutics, DBV and Novartis; and serving as an associated editor for Annals of Allergy, Asthma & Immunology and as an executive board member for the American Board of Allergy and Immunology. The other study authors report no relevant financial disclosures.


Receive an email when new articles are posted on

Please provide your email address to receive an email when new articles are posted on .
We were unable to process your request. Please try again later. If you continue to have this issue please contact customerservice@slackinc.com.

White race and commercial insurance were associated with the early introduction of peanut into infant diets as reported by caregivers, according to a letter published by Annals of Allergy, Asthma & Immunology.

But the results of the single-center study may not be generalizable to other populations, Jay Adam Lieberman, MD, associate professor and director of the allergy and immunology training program at The University of Tennessee Health Science Center, and colleagues wrote.

“We now know that early introduction of foods is probably better to decrease chances children will have a food allergy. The best data for this are with peanut and then with egg. However, implementing this on a population level has been difficult,” Lieberman told Healio.

“We were interested in learning whether social determinants, in our case, race and economic status … affected whether families were receiving education on early introduction of allergenic foods and whether or not they were actually introducing these foods such as peanut to their infants,” he continued.

The researchers conducted an anonymous survey of the caregivers of 475 children (median age, 2 years; 50.4% boys; 51.1% African American; 43.2% white) attending their medical center’s outpatient and inpatient locations between May 2021 and October 2021. State coverage provided insurance for 66.4% of these children.

Additionally, education about early introduction of allergens had no effect on whether caregivers reported introducing peanut or egg to their children.

“It was interesting to see that race did affect whether parents reported introducing peanut into their child’s diet before 1 year of age. This was independent of whether the parents reported having received education on this — meaning, even if a parent reported receiving education, if they were African American, they were less likely to introduce peanut into the child’s diet early,” Lieberman said.

This suggests that several factors that may affect whether parents are willing to feed their infants foods that are common allergens, Lieberman explained.

“And simply educating parents at normal well-child visits may not change behavior,” he said.

Considering these differences in early introduction based on race, the researchers wrote that further research may reveal whether cultural belief systems play a role.

The researchers also noted that the lack of impact that education had on whether caregivers introduced allergens into their infants’ diets could be due to limitations in their survey, insufficient or incorrect education, or difficulties in overcoming long-held beliefs.

Differences in peanut introduction based on insurance, the researchers continued, could be due to reliance upon Women, Infant and Children food packages, which do not include peanut butter for children aged 1 year and younger, among families on Medicaid.

“We do recommend primary care providers continue to educate families that early introduction of allergenic foods is OK and may be beneficial in reducing chances their child will have a food allergy,” Lieberman said, adding that guidelines on how and when to do so are available.

“However, we need to gain a better understanding of the barriers of early introduction, because on a population level, it has not been very successful to date,” he said.

Many groups are now investigating these barriers, Lieberman said.

“Whether it’s barriers at the provider level (do providers at the primary care level know and understand the latest guidelines on introduction?) or at the parent level (are parents going to be hesitant to introduce peanut into an infant’s diet no matter what the provider says?), we have to first understand what the barriers are and then try to fix them,” he said. “It’s a complicated problem.”


Receive an email when new articles are posted on

Please provide your email address to receive an email when new articles are posted on .
We were unable to process your request. Please try again later. If you continue to have this issue please contact customerservice@slackinc.com.