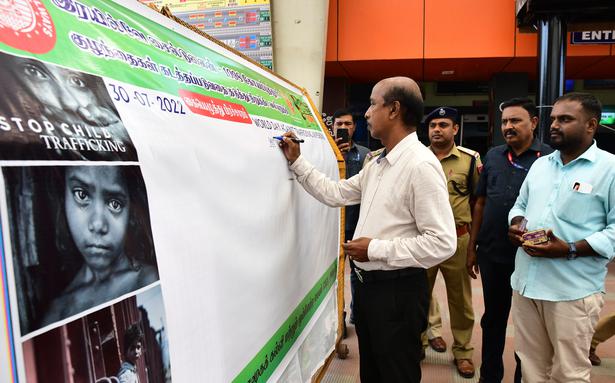 Over 20 under-18 children were rescued from exploitation and trafficking by the Railway Childline, Government Railway Police and Railway Protection Force in July 2022, according to the Centre for Social Education and Development (CSED).

The ‘World Day Against Trafficking in Persons’ was marked with a signature campaign against kidnapping at Coimbatore railway station by Railway Childline, Women and Child Development department and CSED. CSED plans to organise an awareness campaign regarding this on Monday.

The CSED-run Railway Childline has been running at platform two in the Coimbatore Junction station for four years.

The event coordinator from CSED D. Rajendran said that 25 children were rescued by the Railway Childline at the Coimbatore Junction station in July.

“Around 197 children were rescued between January and June. Most of them were from Bihar, Jharkhand, Odisha and West Bengal where there are higher tribal populations. The children will be secured in [one of the 28 child welfare committee-recognised] homes in the city until their parents are traced,” he said. He stated that 273 minors were rescued between April 2021 and March 2022 from exploitation by the childline, GRP and RPF.

“There are several ‘source-stations’ in the northern states. Many under-18 year-old children from below-poverty-line families are being brought here by employers.”

“Coimbatore is a huge hub for pooling in such child labour activities as there are many industries like coir, poultry, spinning mills, gold jewellery workshops, brick kilns and dairy farms, employing kids. We have rescued Bihar-native 90 children in June from such crimes,” he said.

Cautioning about online blackmailing and kidnapping groups, he said families must check social media and messaging platforms used by their kids, even for educational purposes to secure them against trafficking.

“In April, we rescued a boy aged 16-17 years, who had been starving for about three months and suffered severe pains. In May, he underwent an appendix operation at a government hospital and he was discharged,” he added. He was sent to his home as per procedure by the police, Mr. Rajendran added.

Arunjith C.T, assistant police sub-inspector, RPF, told The Hindu, “maximum number of kidnapping and trafficking of children takes place in trains as exploiters find this mode easier to transport. On Friday, 12 girl children were rescued from trafficking at a railway station in Kerala.”

“Many children also leave home due to poverty or mental pressure. Due to a lack of education and awareness, some parents even willingly send their kids to battle privation. Many children are being transported from villages of northern States, as the South pay more for child labourers — ₹1000 is offered here as wages for unskilled labourers whereas in the North, it is ₹300-400. Those who get involved in such trafficking may have political or powerful connections,” he said.