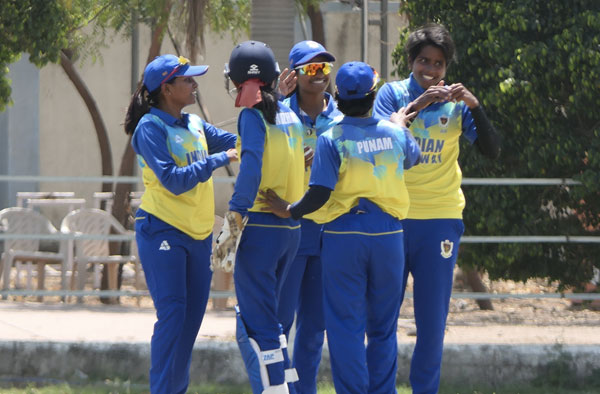 The 14th edition of the Senior Women’s T20 Trophy got underway on the 12th of October and after 9 days and 126 games of action, the tournament has got its final four for the Semis that’ll be played on the 3rd of November. Below is a report on the first couple of Quarter-Final games that were played in the morning hours.

Madhya Pradesh put in to bat first had opener, Aashna Patidar’s start come to a close on 9(8) and was followed back to the dressing room by Reena Yadav 1(5) and Tamanna Nigam 0(1) with 10 on board. The side then lost opener/skipper, Neha Badwaik on 0(6) and in further collapse lost Manjiri Gawade on 5(6) and Nikita Singh on 1(4). With 19 on board, the team had half its side back in the shed inside the powerplay overs. Priti Yadav and Salonee Dangore then departed on respective scores of 4(12) and 1(7) and the side now were 8 down for 24. Rahila Firdous’ 9(10) and Charu Joshi’s 7*(17) pushed the sides total to 40 before Poonam Soni’s wicket on 1(10) had the side bowled out in 16 overs of play. Railways had Anjali Sarvani with figures of 3/7 (3) lead the wickets chart that had Arundathi Reddy, Rajeshwari and Poonam Yadav follow with a couple of wickets each. Swagatika Rath too with a wicket to her name was on the chart.

Defending champions, Railways in reply had openers, Nuzhat Parween and S Meghana in 9.1 overs chase down the required to register a commanding 10-wicket win that saw openers finish unbeaten on respective scores of 12(26) and 29(29).

Bengal put in to bat first had openers, Mita Paul and Deepti provide the team with a steady opening run stand that came to a close with the wicket of skipper, Mita on 21(40) with 41 on board just inside the halfway mark. Soon, Deepti’s start too came to a close on 20(18) and P Bala then alongside Richa got going, but following the trend, the pair too departed after having starts on respective scores of 14(16) and 12(8). Dhara Gujjar and Kashish Agarwal stepped up with a crucial 34-run stand that saw curtains with the wicket of the latter on 20(11) and the former finished unbeaten on 30(24) in guiding Bengal’s total to 121. Rajasthan in the wickets had SS Kalal at the top with 3 against her name and S L Meena, Shanu, and K P Choudhary follow with a wicket each.

Rajasthan in reply had opener, S R Jat hold an end tight, while she lost partners in opener/skipper, Jasia Akhter on 2(5) and S P Kumawat on 0(2) with 5 on board. Jat was well partnered by T B Vaishnav and the pair’s 40-run stand saw curtains with the wicket of the former on 18(21). It wasn’t long before the side lost a wicket more in S R Jat’s defensive knock of 21(39) coming to a close. S L Meena started well, but soon lost her partner, J D Choudhary on 2(3) and then alongside, P B Sharma stitched a partnership. While P B Sharma did well to pace her innings, S L Meena struggled and eventually, the side fell short of the required by 18 runs with the two finishing unbeaten on respective scores of 27(19) and 28(31). Bengal with the ball, in the wickets column, had Gouher Sultana and Sukanya Parida with a couple of wickets each and Deepti too finished with a wicket to her name.

(Click here to read the report on the 3rd and 4th Quarter-Final games that followed later in the day.)