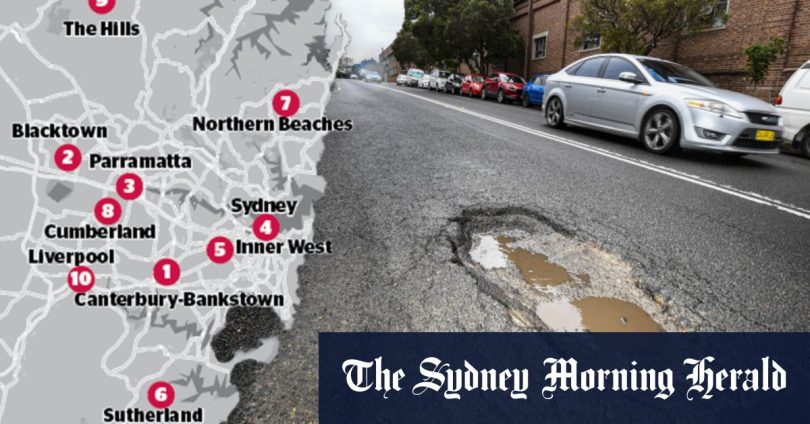 The NRMA said it had received 9814 calls for assistance from drivers who have suffered wheel and tyre damage so far this month, with almost half of them from outside of Sydney. Last year, it received 7907 calls for the whole month.

NRMA spokesman Peter Khoury said the potholes were a “massive concern” for the organisation and its members.

The amount of water on the road meant the potholes were often difficult to see and some were so deep they were causing significant damage to vehicles, beyond just one wheel or tyre, prompting a jump in demand for tow trucks. “The damage is so severe, you can’t just fix it on the side of the road.”

Canterbury Bankstown Mayor Khal Asfour said the extreme weather of March and July had damaged 435 local roads and the council was working around the clock to repair them. It had filled 862 potholes since the first weather event.

“I am not surprised we have a high number of roadside callouts when you consider the volume of traffic travelling in and through our city,” he said. “It’s not lost on me that there are still some roads that have potholes, but the unpredictable and constant rain has hindered our teams.”

A report published in December by the Australian Local Government Association found about 10 per cent of the nation’s local roads were in poor condition and association president Linda Scott said that figure would likely be higher now, after the rain.

“Roads represent nearly 40 per cent of total local government infrastructure – and replacing those that are in poor condition is estimated to cost nearly $18 billion. As climate change and resultant infrastructure damage worsens, these figures are likely to be underestimating the real cost.”

The state government declared the March and July weather events as natural disasters and 33 local government areas were affected by both. Councils covered by these declarations are eligible for joint state-federal funding to restore damaged roads and other public assets.

On the Northern Beaches, where 4999 potholes have been reported this year on local roads, the council has quadrupled its annual budget for “heavy patching” of road surfaces, from $1 million to $4 million. It has also almost doubled its budget for pothole maintenance, from $300,000 to about $500,000. The bulk of the extra spending is due to storm damage and has been paid for with emergency funding from the state government.

Blacktown City Council said the March event caused $11 million of damage to local roads, and it had received $6 million in state funding to undertake repairs. The July flood had caused another 445 potholes.

Mayor of Shoalhaven City Council Amanda Findley said the rain had exacerbated the road damage suffered in March and its incessant nature was hampering efforts to fix the network. “It’s completely impossible to get on top of the task, which is frustrating the daylights out of the community,” she said.

The Morning Edition newsletter is our guide to the day’s most important and interesting stories, analysis and insights. Sign up here.