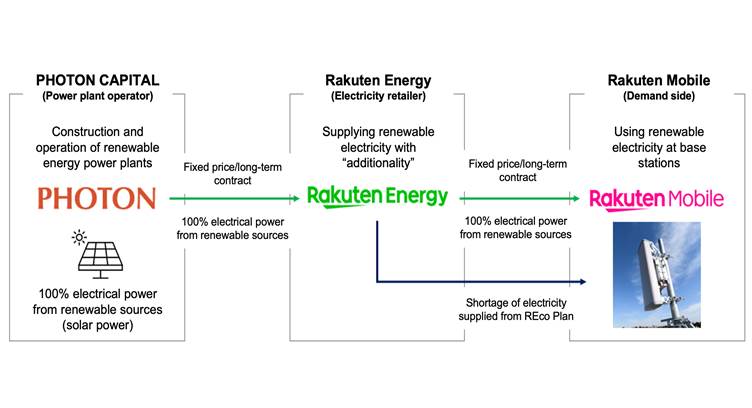 Rakuten Mobile, Rakuten Energy, and PHOTON CAPITAL announced an agreement to supply Rakuten Mobile’s base stations with electricity from renewable sources from 2023.

Going forward, Rakuten Mobile and Rakuten Energy plan to expand the initiative to supply its base stations with renewable electricity nationwide to accelerate the Rakuten Group’s activities to realize a carbon neutral society and reduce emissions of greenhouse gases.

An offsite PPA is a long-term power supply agreement in which a generator builds renewable power stations in remote locations for a specific customer, and transmits the electricity generated by the equipment over the grid to the customer’s facilities. As a new renewable power station is built, renewable power generation capacity increases. Therefore, offsite PPAs are considered to have “additionality,” and the potential to contribute to climate change mitigation more effectively. In addition, the 100% renewable electricity procured through offsite PPAs is not part of the Feed-in Tariff (FIT) system.

In addition to trials of installations of solar panels onto base stations, Rakuten Mobile is also looking into the efficient and balanced use of both onsite and offsite PPAs to efficiently use renewable energy in its base stations. Going forward, the operator plans to expand its use of renewable electricity in its base stations and carry out initiatives aimed at reducing greenhouse gas emissions from its network equipment.

Rakuten Energy is carrying out a variety of initiatives to realize a sustainable society. These include “REco Plan” and the J-Credit trading system “Rakuten Energy Trading System (REts)” to support its customers in their efforts to decarbonize and achieve carbon neutrality. In addition, in the “Rakuten Denki” power supply plan for individual customers, customers can receive Rakuten Points for saving energy, contributing to decarbonization and stabilization of the electricity supply. By securing and supplying electricity through the offsite PPA, Rakuten Energy aims to further promote measures against climate change.

PHOTON CAPITAL is engaged in development of and investment in PV power businesses both in Japan and overseas, while emphasizing harmony with the surrounding environment and securing long term safety and stability of the PV plants. In September 2021, the company established a fund of which the core investment target is non-FIT PV power plants. Following the original intentions of the fund, this investment to PV plants through SPC which will start operation in 2023 is expected to contribute to achieving the targets of the Strategic Energy Plan, which includes maximum installation of renewable energy for 2030. With the aim to become a leading company in the non-FIT PV generation business, PHOTON CAPITAL will continue to develop and operate both domestic and overseas PV power plants, and strive to achieve a sustainable society.