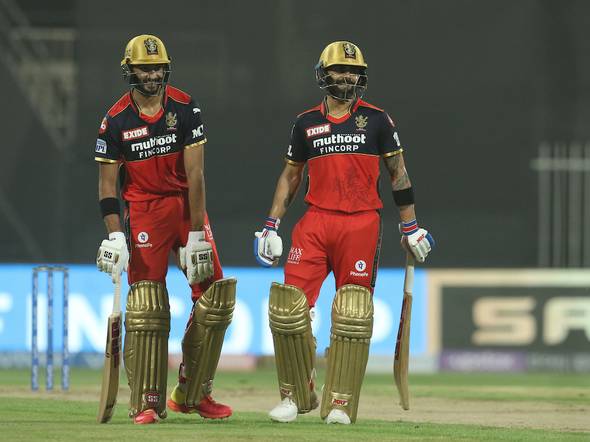 RCB 82/0 in 9 overs: BAANG! Padikkal absolutely creams Jadeja with a humongous hit over long-on. Jadeja continues to keep a slower trajectory, one that you simply can’t afford on a track like this. Padikkal prods forward and fires it deep into the stands.

RCB 70/0 in 8 overs: Vintage Virat! Bravo hits the slot as well and gets punished. Kohli once again steps out of his crease and launches a fierce flick to the midwicket boundary.

Bravo up with the ball

RCB 61/0 in 7 overs: Padikkal goes downtown again! Stand and delivery approach from DDP. Jadeja tosses one in and Padikkal lobs it from the slot for another sharp boundary straight over the bowler’s.

Jadeja into the attack

RCB 55/0 in 6 overs: Fifty up for RCB! Kohli thwacks the short ball from Hazlewood for a crisp boundary through midwicket. Absolute authority on that one as he finds plenty of time to dismiss it from his presence.

RCB 46/0 in 5 overs: What a shot! Thakur hits the length and Kohli hammers the ball over long-on for a massive six. He’s not even bothered to have a look at it in the follow-through and that tells us, he’s found his zone.

RCB 36/0 in 4 overs: DDP special! Fends one in the slot and gets whacked by a marvellous stroke. Padikkal stands in his stride and simply swings through the arc and hits a straight six. Pressure on CSK.

RCB 28/0 in 3 overs: Boundaries galore! Padikkal drills a loosener from Chahar for another exquisite boundary through cover. He gets off strike with a single. Kohli then takes charge with a cracking stroke. He advances, picks the knuckle ball early and slams it to the midwicket boundary for four.

RCB 18/0 in 2 overs: VK in the mood! Hazlewood finds the outside-edge as Kohli steps down to attack first ball. Hazlewood offers length and this time Kohli pummels it through the covers for a glorious drive. He’s on his way tonight. Can he make it count?

Hazlewood into the attack

RCB 13/0 in 1 over: Welcome to Sharjah! Kohli gets off the mark with back to back boundaries as there’s no swing on offer for Chahar. Absolute belter of a pitch and Kohli nonchalantly flicks Chahar to midwicket for a breezy four. He takes a single. Chahar finds a hint of shape and beats the outside edge off Padikkal, an inch away from the off-stump. Padikkal responds in style with a glorious boundary through the covers. Dream start for RCB.

Deepak Chahar with the new ball.

And we’re ON! MS Dhoni’s yellow brigade march to the field. Kohli and Padikkal at the middle.

Well, well. The toss is further delayed, folks. It’s pretty dark and breezy at the moment.

7:05PM IST: Toss in five minutes.  Dhoni and Kohli are at the middle and continue to hold talks with the umpires and match referee Javagal Srinath.

UPDATE: DESERT STORM RETURNS. The toss is delayed due to a raging sandstorm in Sharjah.

6:45PM IST: PITCH REPORT – “There were 220 sixes hit last year (at Sharjah) However, this wicket is patchy, you are not going to get the normal sheen. I actually think you should have a bowl here, just to see exactly how the wicket is going to play tonight,” – Kevin Pietersen

6:25PM IST: Right, is this the eve for King Kohli to bounce back?

Virat Kohli’s short on runs. Can he fire back to form tonight?   –  SPORTZPICS After being shot out for 92 against Kolkata Knight Riders, a lot is riding on Royal Challengers Bangalore’s explosive batting lineup when it takes on Chennai Super Kings in Sharjah on Friday.

Last year, the venue saw some of the highest scores scored in the tournament with its short boundaries, and the RCB batsmen will hope to find their groove in what could be helpful batting conditions.

On Wednesday, Virat Kohli had an extended net session, and coach Mike Hesson sounded confident that the skipper had found his rhythm back.

With AB de Villiers not donning the gloves, it will be interesting to see if RCB tries Kerala wicketkeeper-batsman Mohammed Azharuddeen, who is known for his power-hitting, to give more depth to its lineup.

Meanwhile, CSK will be high on confidence following its 20-run win over defending champion Mumbai Indians, especially after being reduced to 24/4 batting first on Sunday.

But last year, the three-time champion struggled in Sharjah, losing its three matches.

All-rounder Sam Curran will be available for Friday’s game after completing his quarantine and could give the team an option, should it choose to swap him for Moeen Ali.

Another piece of good news is that both Ambati Rayudu, who took a blow on his arm and Deepak Chahar, who suffered cramps against MI, are fit and available.

With a settled lineup, CSK will hope to get its seventh win of the season and take one step closer to the playoff.